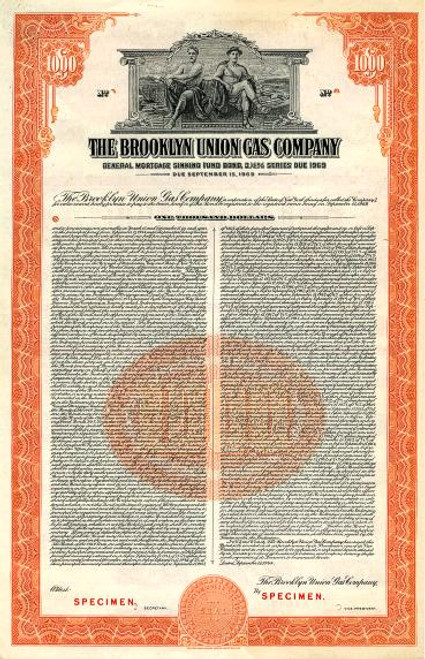 Beautifully engraved specimen from the Brooklyn Union Gas Company dated in 1944. This historic document was printed by Hamilton Banknote Company and has an ornate border around it with a vignette of two allegorical men with company facilities in the background. This item is over 61 years old. 38 coupons attached on right. 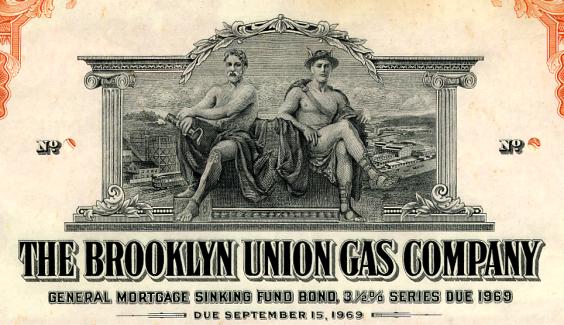 Certificate Vignette
In 1997, after 102 years, Brooklyn Union Gas Company formed a holding company with a new name, KEYSPAN Energy Corporation. Each share of Brooklyn Union was exchanged for one share of KEYSPAN. KEYSPAN is the nation's fifth largest gas distribution company and has been a pioneer in the industry. Earnings for the first nine months of this fiscal year are up 11-percent over the same period last year due to gas sales growth, added revenue streams and cost efficiencies. It holds interest in various companies, including Houston Exploration, Iroquois Gas Transmission System and BG PLC's Phoenix Natural Gas Ltd. and Premier Transco Ltd. subsidiaries. About Specimen Certificates Specimen Certificates are actual certificates that have never been issued. They were usually kept by the printers in their permanent archives as their only example of a particular certificate. Sometimes you will see a hand stamp on the certificate that says "Do not remove from file". Specimens were also used to show prospective clients different types of certificate designs that were available. Specimen certificates are usually much scarcer than issued certificates. In fact, many times they are the only way to get a certificate for a particular company because the issued certificates were redeemed and destroyed. In a few instances, Specimen certificates were made for a company but were never used because a different design was chosen by the company. These certificates are normally stamped "Specimen" or they have small holes spelling the word specimen. Most of the time they don't have a serial number, or they have a serial number of 00000. This is an exciting sector of the hobby that has grown in popularity over the past several years.