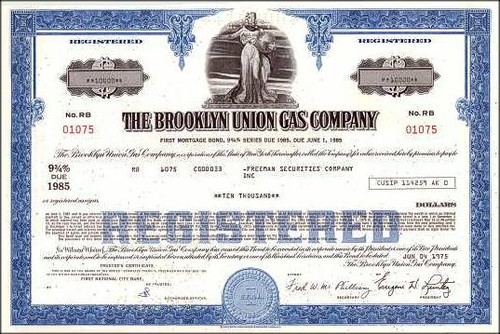 Beautifully engraved certificate from the Brooklyn Union Gas Company issued in 1975. This historic document was printed by the Security-Columbian Banknote Company and has an ornate border around it with a vignette of an Allegorical Woman holding a globe. This item has the printed signatures of the Company's President and Secretary and is over 26 years old. 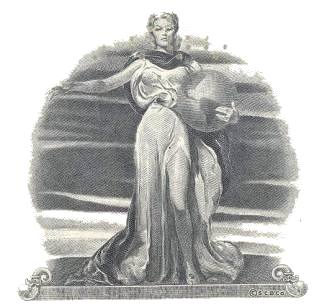 Certificate Vignette
OCTOBER-1997 -- After 102 years, Brooklyn Union Gas Company formed a holding company with a new name, KEYSPAN Energy Corporation. Each share of Brooklyn Union was exchanged for one share of KEYSPAN. The New York Stock Exchange symbol also changed from BU to KSE as of September 30. The official ceremony took place October 1 at the closing bell on the floor of the exchange. KEYSPAN is the nation's fifth largest gas distribution company and has been a pioneer in the industry. Earnings for the first nine months of this fiscal year are up 11-percent over the same period last year due to gas sales growth, added revenue streams and cost efficiencies. It holds interest in various companies, including Houston Exploration, Iroquois Gas Transmission System and BG PLC's Phoenix Natural Gas Ltd. and Premier Transco Ltd. subsidiaries.