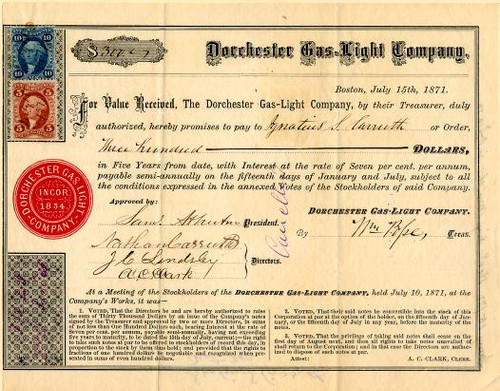 Beautifully engraved certificate from the Dorchester Gas Light Company issued in 1871. This historic document has an ornate border around it with an embossed red corporate seal. This item is hand signed by Samuel Atherton, President; Nathan Carruth, J.C. Lindsley and A.C. Clark, Directors; and William Pope, Treasurer and is over 136 years old. The company was incorporated in 1854. In 1905 the Company was merged with others to form the Boston Consolidated Gas Company, which was a utility subsidiary of Massachusetts Gas Companies. In 1939 Massachusetts Gas Companies was succeeded by Eastern Gas and Fuel Associates. In later years other companies were merged with Boston Consolidated. In 1955 the name of the company became Boston Gas Company. By 1980 Boston Gas Company was the largest gas utility in New England. The company is now part of Keyspan. Nathan Carruth, 1808-1888. From American Series of Popular Biographies. Massachusetts Edition. This Volume Contains Biographical Sketches of Representative Citizens of the Commonwealth of Massachusetts. Boston: Graves & Steinbarger, 1891. NATHAN CARRUTH, first president of the Old Colony Railroad, was born in North Brookfield, Mass., December 25, 1808, and died at his home in Dorchester, May 19, 1888. He was the fourth son of Francis and Mary (Hale) Carruth and a descendant in the fourth generation of John Carruth, who married at Marlboro, Mass., Jemima Russell, of Sudbury. The line was John, Nathan, Francis, Nathan. John Carruth died September 19, 1798, aged eighty-four years. His son Nathan, first, whose birth took place in Northboro, Mass., March 29, 1744, settled in 1775 at North Brookfield, where he died May 22, 1827. He married Elizabeth Whipple, who was born June 29, 1748, daughter of Francis Whipple, of Westboro, Mass. She died at North Brookfield, May 8, 1822. Francis Carruth, son of Nathan and Elizabeth Carruth, was born in North Brookfield, February 23, 1780. A prosperous farmer, he took an active interest in local public affairs, and was a magistrate and a man of influence in his own town and county. For a long period he was a member of the Board of Selectmen. He was also for many years a member of the State Senate from Worcester County. He was of amiable disposition, and was greatly beloved by his fellow townsmen. He married Mary Hale, daughter of the Hon. Thomas and Ruth (Hardy) Hale. She was born January 2, 1782, and died September 11, 1859. Mr. and Mrs. Francis Carruth were the parents of nine children, namely: Isaac; Francis Sumner; Hiram; Nathan, second, the subject of this sketch; Thomas Hale; Charles Whipple; Martha Whipple; Charles; and Mary Fidelia. Of these children none are living except Martha Whipple. Nathan Carruth, second, son of Francis, was educated in his native town, and resided there until seventeen years old. Coming to Boston in 1825, in the succeeding year he was employed as a clerk by a concern engaged in the West India goods trade, and he then served an apprenticeship in the drug store of Messrs. Fletcher and Carruth. After the dissolution of that firm in 1831, he entered into partnership with his brother Francis Sumner, under the firm name of F.S. & N. Carruth. They were associated in business for eight years, at the expiration of which time Nathan Carruth formed a copartnership with his younger brother Charles, under the firm name of N. & C. Carruth. The latter concern had a most successful career in the drug business in Boston, covering a period of many years. The revolutionizing of traffic made possible by the advent of steam as a motive power found a most enthusiastic supporter in Mr. Carruth, who devoted much time, energy, and capital to the introduction of railway lines in Massachusetts and other New England States. He not only labored to promote their establishment, but after their completion he took an active interest in their welfare; and besides being the first president and general manager of the Old Colony Railroad, he was for a number of years treasurer of the Northern Railroad of New Hampshire. He was the president of the Dorchester Gaslight Company and a director of the Mattapan Bank. Politically, he was a Republican. In 1847 he moved to Dorchester, laying out at great expense a most attractive estate in what is now known as Ashmont. He resided there for the rest of his life, which terminated, as noted above. Mr. Carruth was very fond of travel. He visited Europe, and went through Palestine, Syria, and the East several times. He was the soul of honor, and his generosity was extensive. He was deeply interested in the oral and religious welfare of the community in which he exercised a beneficent influence, and was a prominent member of the Second Parish under the pastorates of Dr. Codman and Dr. Means. He was also a corporate member of the A.B.C.F.M.,* a life member of the Home Missionary Society, and a generous contributor to all good works. Mr. Carruth was twice married. His first marriage took place December 2, 1830, with Miss Louisa Jones Pratt, who was born August 5, 1809, daughter of Eleazar Pratt, and died February 10, 1844. Of that union there was one child, Henrietta Louisa, who was born in Boston, December 15, 1831, and died November 28, 1835. On March 15, 1845, he married for his second wife Mrs. Sarah Ann Porter, widow of Royal Loomis Porter and mother of the late Edward Griffin Porter, A.M., a biographical sketch of whom appears on another page of this volume. She was born March 6, 1813. Of this second union were born three children, namely: Ellen, April 18, 1846; Emma, born April 28, 1849; and Herbert Schaw, born February 15, 1855. Miss Ellen Carruth is now residing with her mother at Ashmont. Emma died May 30, 1888. Herbert Schaw Carruth was married September 13, 1877, to Miss Annie French Pope, who was born in San Francisco, Cal., August 23, 1854. Their children are: Nathan Carruth (the sixth of that name), who was born June 28, 1880; and Henry Pope, born March 25, 1884. A daughter, Ethelwin, who was born March 12, 1887, died in August, 1887. *A.B.C.F.M. American Board of Commissioners for Foreign Missions (Congregational)