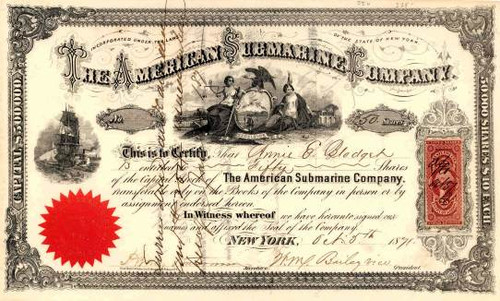 Beautiful certificate from the American Submarine Company issued in 1871. This historic document was printed by the Ferd. Mayor and Sons Company of New York and has an ornate border around it with a vignettes of an old sailing ship and two women flanking a coat of arms with an eagle, train and scale. These is also a revenue stamp that was used during and after the Civil War. This historic certificate is over 138 years old.

Certificate Vignette
In 1863, a group of Northern speculators formed a company to take advantage of a vote in the U.S. Congress to approve the use of privateers. However, when President Abraham Lincoln declined to accept the authority, construction of this consortium's submarine, the Intelligent Whale, languished. The boat was not completed until 1866, long after the war ended. In 1869, the the American Submarine Company was formed to finance the effort after the original investors ran out of money. The company tried to sell the concept to the government, and the U.S. Navy finally held formal acceptance trials in 1872. The Intelligent Whale failed and the project was dropped and the shareholders' were under water with their investment... 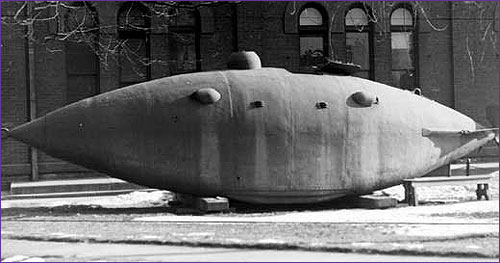 The Intelligent Whale is now an exhibit at the National Guard Militia Museum of New Jersey, in Sea Girt, N.J.