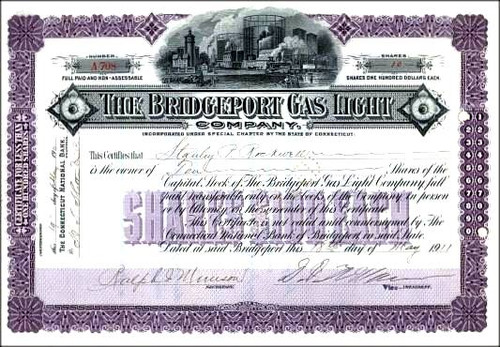 Beautifully engraved certificate from the Bridgeport Gas Light issued in 1910-1916. This historic document has an ornate border around it with a vignette of a factory. This item is hand signed by the Company's Vice President and Secretary and is over 85 years old.

Certificate Vignette
In 1849, A group of citizens, determined not to be left in the dark, founded the Bridgeport Gas Light Company. At that time, Bridgeport was hardly more than a hamlet with a population of 7,000. By December 1851, the company had 76 private customers and 26 public street lamps. The new company made "illuminating" gas by heating bituminous coal at its Housatonic Avenue plant. In 1886, Carburetted water gas was introduced as a new process for the manufacture of gas. A second gaslight company, Citizens Gas, arrived on the scene in Bridgeport. One of its founding fathers was P.T. Barnum. Prior to 1890, gas was used primarily for illumination. By the turn of the century, cooking had replaced illumination as the industry's major load factor. In 1902, the Bridgeport Gas Light Company acquired Citizens Gas. In 1910, the gas industry began expanding from lighting and cooking to home heating, clothes drying and a myriad of industrial applications. The Bridgeport Gas Light Company opened its own merchandising operation in downtown Bridgeport when the company purchased the Gas Appliance Exchange at 799 Main Street. In 1939, the great industrial war expansion began and the use of gas gained growing acceptance of gas as an important industrial fuel. George S. Hawley, President of Bridgeport Gas, said: "I never thought that I should be called upon to ask you and our more than 45,000 other friendly customer to use less gas...The Gas Industry today is at the highest peak of all-time-greatest activity, greatest sales, and greatest progress in research and development. And now here I come and ask you to use less gas...to help those who are fighting this gigantic and terrible war on all fronts. They must have guns and ammunition, airplanes and parachutes, all of which are made right here by our Bridgeport workers. In order to manufacture them, they must have gas in great quantities for fuel. The government has declared gas to be a vital war necessity. Without it war industries would be paralyzed." To meet the growing demand following the war years, the Bridgeport Gas Company embarked on a major construction project to expand its distribution facilities. The project would ready the company for a major change in the industry the arrival to New England of natural gas energy. The company switched from manufactured gas to natural gas in 1952. The demand for natural gas took yet another great leap forward. The Bridgeport Gas Light Company expanded its service territory to include shoreline communities from Westport to Stratford. In 1955, the Bridgeport Gas Light Company changed its name to the Bridgeport Gas Company. In 1960, the Company constructed a liquid propane plant at Reservoir Avenue in Trumbull. In 1962, the Bridgeport Gas Company suffered a major fire, which destroyed the company's service headquarters and appliance warehouse at 412 Housatonic Avenue, causing more than $100,000 in damage. In 1967, the Bridgeport Gas Company and the New Haven Gas Company merge to form The Southern Connecticut Gas Company. The Company moved into new headquarters at 880 Broad Street, Bridgeport, in 1969. The new structure featured a unique total energy system that generated all of the facility's power, including electricity, using natural gas. Southern maintained service centers at 39 Pine Street, Bridgeport and 347 Chapel Street, New Haven, and an administration building at 55 Church Street, New Haven. In 1979, the Connecticut Energy Corporation is established as the parent company of The Southern Connecticut Gas Company to set the stage for the Company's expansion and success. Southern expanded its service territory and began delivering natural gas to the shoreline communities of Westbrook and Old Saybrook, bringing the number of communities served to 22 in addition to Westport, Easton, Weston, Fairfield, Trumbull, Bridgeport, Stratford, Milford, Orange, West Haven, New Haven, Woodbridge, Hamden, North Haven, East Haven, North Branford, Branford, Guilford, Madison and Clinton. In 1993, Southern moved into its current corporate headquarters at 855 Main Street in Bridgeport in 1993. The Company centralized its operations center at 60 Marsh Hill Road, Orange the following year. Connecticut Energy formed two new subsidiary companies: CNE Energy Services, Inc., which provides an array of energy commodities and services to commercial and industrial customers throughout New England and New York; and CNE Development Corporation, which participates in a natural gas purchasing cooperative. Connecticut Energy added a third subsidiary, CNE Venture-Tech in 1996. CNE Venture-Tech invests in ventures that offer technologically advanced energy-related products.