Beautifully engraved signed, partially issued and uncancelled certificate from the Connecticut Telephone Company printed in 1881. This historic document has a vignette of an early telephone receiver. This item is hand signed by the company's president, Marshall Jewell. Early telephone certificates are hard to find. This historic document is over 131 years old. EF+ Condition.

Certificate Vignette
On January 28, 1878, two years after Alexander Graham bell was awarded a patent on his primitive telephone, the world's first commercial telephone exchange opened for business in New Haven, Connecticut. It was a small beginning. There were only 21 subscribers, served by eight lines - lines strung from trees, rooftops, anything available. The office itself was crudely finished. The switchboard rested on a kitchen table, a packing box served as Coy's desk and a soapbox was his chair. The only other furniture was a battered armchair reserved for visitors. In 1881, Jay Gould won control of Western Union along with the the Connecticut Telephone Company. The control of the Connecticut company was of little interest to Gould. The company's main shareholders persuaded Marshall Jewell to become president of a new company called the Connecticut Telephone Company. As with the formation of each earlier company, a substantial increase in capital was planned, and Jewell obtained the help of other Hartford financiers in raising the money. Some of these funds were used to buy back Gould's stock. The company was subsequently known as the Southern New England Telephone Company ( SNET ) and became part of American Telephone and Telegraph ( AT&T ). On March 28, 2002 SBC Communications completed its takeover of Connecticut's telephone company, SNET. 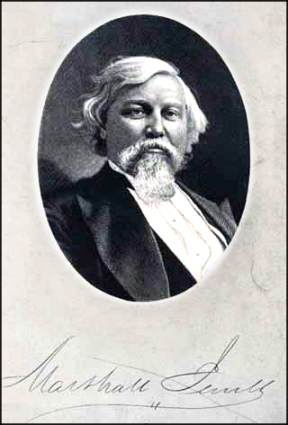 Marshall Jewell, President
Marshall Jewell (1825-1883) was Connecticut's 27th governor was born in Winchester, New Hampshire, on October 20, 1825. He was educated in New Hampshire's public school system, and apprenticed as a tanner under the supervision of his father. Jewell later learned the telegraphy business and moved to Akron, Ohio, where he supervised a telegraph office. He also was active and one of the first members of the Republican party in Connecticut. Jewell first entered politics in 1867 as an unsuccessful candidate for the Connecticut State Senate. He was elected Governor of Connecticut in 1869 and won reelection in 1871 and 1872. During his tenure, Jewell's administration supported women's rights. He advocated for a woman's right to vote and for developing opportunities in educating women. The state militia also was restructured during Jewell's administration. After leaving office, Jewell was appointed in 1873, as minister to Russia. He served as minister until August 24, 1874, when he was then appointed President Grant's postmaster general, a position he held until July 12, 1876. Jewell also chaired the 1880 Republican National Convention. Governor Marshall Jewell died on February 10, 1883, and is buried at the Cedar Hill Cemetery in Hartford, Connecticut. When Jewell's term as governor expired, President Ulysses S. Grant sent him to Russia as ambassador. Jewell was recalled from Russia late in 1874 and appointed postmaster general of the United States. When Garfield was nominated for the presidency in 1880, Jewell was made chairman of the National Republican Committee. His energy in conducting Garfield's campaign proved successful. Yet the campaign took a heavy toll on Jewell's health and he retired from public life. He passed away at Hartford three years later. The old Jewell homestead, the birthplace of this popular governor, diplomat and postmaster general, still stands in the town of Winchester. Josephine Jewell, daughter of Marshall Jewell, founded the Association of Day Nurseries of New York City.