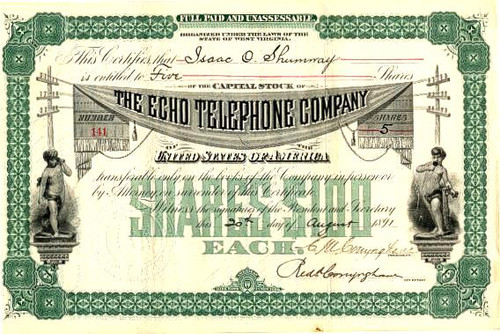 Beautifully engraved certificate from the Echo Telephone Company issued in 1891. This historic document was printed by American Bank Note Company and has an ornate border around it with a vignettes of two cherubs talking on an early telephone with old telephone poles in the background, and the company's name on a curtain. This item has the signatures of the Company's President, Thos. D. Conyngham and Secretary, Redmund Conyngham and is over 120 years old.

Certificate Vignette
As reported in West Virginia in 1889: The Echo Telephone Company of the United States of America was organized for the purpose of manufacturing and operating telephones and signaling instruments under the patents of Noel B. Ginochie, now or hereafter acquired from him and others, with right to sell territory, form sub-companies throughout the United Stated and elsewhere for its use, and to purchase and dispose of any properties that may be necessary for the proper prosecution of the said corporation. Which corporation shall keep its principal office or place of business, at the city of New York, in the county of New York and state of New York, and is to expire on the first day of July, 1938. And for the purpose of forming the said corporation, we have subscribed the sum of five thousand dollars to the capital thereof, and have paid in on said subscriptions the sum of five hundred dollars, and desire the privilege of increasing the said capital by the sale of additional shares from time to time, to five million dollars in all. The capital so subscribed is divided into shares of one hundred dollars each, which are held by the undersigned respectively, as follows, that is to say: By William W. Averell, New YoTk City, N. Y., ten shares. Redmund Conyngham, New Brighton, L. I., N. Y., ten shares. Thomas D. Conyngham, New Brighton, L I., N. Y., ten shares. Elias M. Greene, New York City, N. Y., ten share3. Noel B. Ginochie, New York City, N. Y., ten shares. And the capital to be hereafter sold is to be divided into ehares of the like amount. Given under our hands this 31st day of July, 1888. Wm. W. Avkrell, Redmond Conyngham, Thos. D. Conyngham, Elias M. Greens, Noel B. Ginochie. Wherefore, the corporators named in the said agreement, and who have signed the same, and their successors and assigns, are hereby declared to be from this date until the first day of July, nineteen hundred and thirty-eight, a corporation by the name and for the purposes set forth in said ageement. Given under my hand and the great seal of the said [G. S.] state at the city of Charleston, this 11th day of August, eighteen hundred and eighty-eight. Henry S. Walker, Secretary of State.