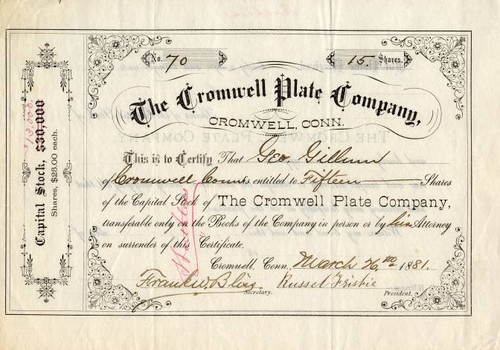 Beautiful certificate from the Cromwell Plate Company printed issued in 1881. This historic document has an ornate border around it with the company name at the top center of the certificate. This item has the original signatures of the Company's President, Russel Frisbie and Secretary, Frank W. Bliss and is over 131 years old. 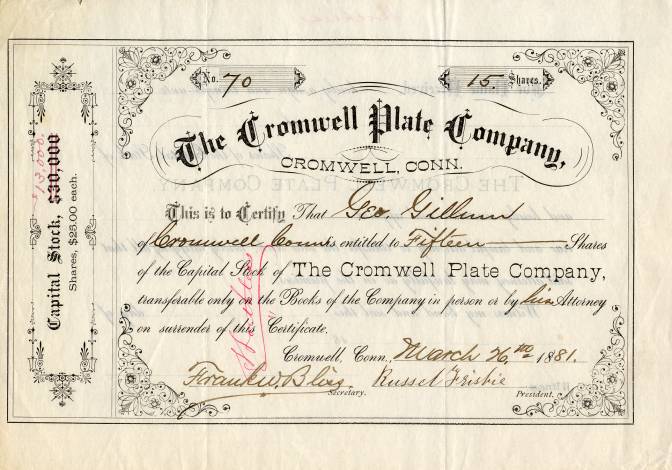 Certificate
Reported in The History of Middlesex County 1635-1885 J. H. Beers & Co., 36 Vesey Street, New York 1884 The Cromwell Plate Company was started about three years ago, but it bids fair to rival many of its older competitors. Some of the most beautiful goods in the market, and some of the most unique designs, are produced by this company. Every variety of plated ware, except the smaller staple goods, are manufactured here. The company was organized in 1881, under the general law of the State. The directors were Russel FRISBIE, John STEVENS, George GILLUM, Robert COWL, F. W. BLISS, J. WILLIAMS, and George RUSSELL. The officers were: Russel FRISBIE, president; Frank BLISS, secretary and treasurer. The present officers are: Russel FRISBIE, president; Silas CHAPMAN jr., secretary; and W. R. MCDONALD, treasurer. The works of the company are located near the Connecticut Valley Railroad depot. The main building which is of wood, is about 40 by 160 feet, three stories high, with an engine and plating room in addition. The engine is of 25 horse power. Some 50 hands are employed, and the annual sales amount to many thousand dollars. Russell Frisbie (1822 - 1896) was another of the unusual personalities in the Frisbie family, his claim to fame being the many inventions which he perfected. He left home when he was nine years old and went to live with a Captain Dowd, a farmer of Clinton, Connecticut. During this period his mechanical and inventive genius began to manifest itself, and he produced a corn sheller which proved to be both useful and popular. After seven years he moved to Chester, Connecticut to learn the carpenter trade with the firm of Potter & Wheeler, but the company dissolved eighteen months later, and he went to Middletown, Connecticut, where he took employment in the pattern department of the W. & B. Douglas Company. Russell remained with Douglas for twenty-five years, and during this time, apparently as a sideline, he perfected several small items of hardware which were sold on a royalty basis by the J. & E. Stevens Company of Cromwell, Connecticut. About 1866 he went to the Stevens Company, where he acquired a quarter-interest in the business, became manager, and eventually assistant treasurer. For many years the Stevens Company had been manufacturing iron wheel toys, doll furniture, toy stoves and so-called "still" banks, and about 1870 they commenced making cast-iron mechanical banks, which proved enormously popular. Records in the U. S. Patent Office indicate that Russell invented two of the Stevens banks: the Blinking Frog (Patent 183, 575, 1872) and the Tammany (Patent 164, 083, 1875). In 1871 Russel patented a toy steam engine which appears in the Stevens catalog for 1872. The little engine was about eight inches high and beautifully made; it retailed for $3.75. In 1872 he patented a second engine of a different type. Between 1868 and 1872 the Stevens Company combined with George W. Brown & Co., to form the American Toy Co. This was just at the period when Russell's inventions were being manufactured and marketed by the Stevens Company, and it is probable that his wife Mary Ann Brown was in some way related to the Brown of this company, but the exact connection is not known. His third child, born in 1849, was named Charles Brown Frisbie. In 1876 Russell served one year in the State Legislature. He was also president of the Cromwell Plate Company, and a director of two banks, a hardware company and a railroad company. History from Wikipedia and OldCompany.com (old stock certificate research service)