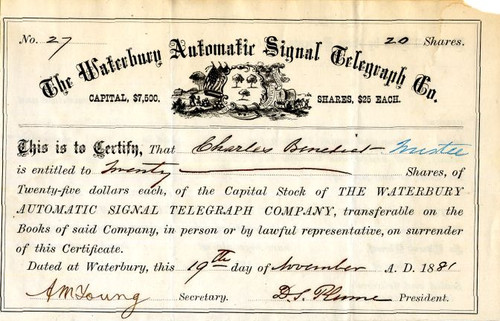 Beautiful uncancelled stock certificate from the Waterbury Automatic Signal Telegraph Co. issued in 1881. This historic document has a lined border around it with a vignette of a nineteenth-century western frontier with a plaque of three trees wedged in the middle of the landscape with Connecticut's Latin motto: Qui Transtulit Sustinet ("He Who Transplanted Still Sustains"). This item has the handwritten signatures of the Company's President, D.S. Plume, and Secretary, A.M. Young; and is over 132 years old.

Certificate Vignette
THE TELEPHONE IN WATERBURY. The first telephone line in Waterbury was built in 1877. It connected the office of Dr. C. S. Rodman, in the building of the Waterbury National bank, with his residence, which was at that time on Prospect street near Hillside avenue. On Thanksgiving day, 1877, a telephone line was put up which extended from the residence of Leroy S. White on Buckingham street to that of George E. Terry, and thence to that of Homer F. Bassett, on Cooke street. The instruments used were the same as those of the Bell telephone now in use, but were of home manufacture. The telephone was introduced for business purposes in 1878, by a company which was organized for an entirely different object. This was the Waterbury Automatic Signal Telegraph company, and was organized May 2, 1878, To build, construct, maintain and work for hire, public and private fire and burglar alarm signal and other telegraphs in Waterbury and adjoining towns, and to use therein the several inventions and improvements secured to William B. Watkins by letters patent of the United States. The organization was accomplished through the efforts of Gerrit S. Glen, of Rochester, N. Y., whose aim was to introduce the Watkins fire alarm system as a private alarm system for factories. The directors of the company were Charles Benedict, F. J. Kingsbury, D. S. Plume, J. S. Elton and Julius Ives, Jr. Mr. Elton was elected president, and H. L. Wade secretary and treasurer. On June 3, rooms were leased at 14 North Main street, a contract was made with the Western Union Telegraph company for the use of their telegraph poles, and Alden M. Young was elected superintendent and manager of the business. Six months later Mr. Plume was appointed a committee to confer with the city authorities with reference to the adoption of a fire alarm system by the city, and to lay before them some definite proposal. (See Chapter VIII, page 118.) In the meantime attention had been turned to the telephone as an invention of practical value. Mr. Glen had heard of experiments with the Bell telephone made in Boston, and a pair of telephones was purchased by the new company, and a line was run from the rooms on North Main street to the office of the Waterbury Clock company and to the offices of the Benedict & Burnham and Scovill Manufacturing companies. By June, 1878, there was a number of telephones in successful operation. On December 30 of the same year, Messrs. Wade and Young were authorized to make such changes in the rates of rental for telephones as they might deem to be for the best interests of the company, and they reported the following: