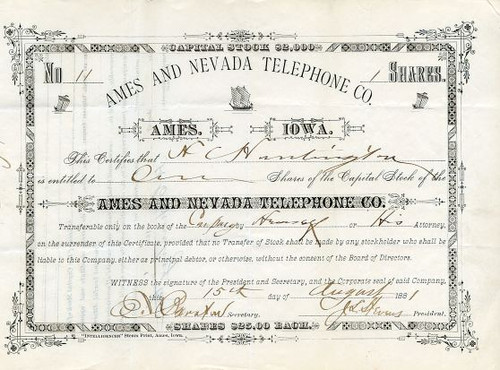 Beautiful early telephone certificate from the Ames and Nevada Telephone Co. issued in 1881. This historic document was printed by the "Intelligencer" Steam Print Company and has an ornate border around it with a vignette of a sailboat. This item has the signatures of the Company's President, J. L. Stevens and Secretary, D. Barston and is over 128 years old. The certificate was issued to and signed on the back by H. C. Huntington.

Certificate Vignette
Biographical and Historical Memoirs of Story County, Iowa Chicago: Goodspeed Publishing Co., 1890. Hon. J. L. Stevens, judge of the Eleventh Judicial District, Ames, Iowa. Judge Stevens is not unknown to the people of this portion of Iowa, but in all the years his life has been conspicuous before the public not a shadow of distrust or suspicion of a wrong act has fallen upon his name. He was born in Northfield, Vt., on May 29, 1850, and was one of four children, three now living, born to the union of Isaac L. and Harriet E. (Tucker) Stevens, also natives of the Green Mountain State. The parents emigrated to Cedar Rapids, Iowa, in 1863, thence to Belle Plain, and are now residents of Marshall County, Iowa. The father is an agriculturist by occupation, but also filled the position of road-master for the Chicago & North-Western Railroad for a number of years. He commenced life by driving an express wagon from Boston to Burlington, Vt., and upon the organization of the Vermont Central Railroad he commenced on the construction, and was thus occupied until 1860. After this he cultivated the soil for a year and then resumed railroading, which he continued until 1870. He is a thorough railroad man, and has a reputation for unflinching honesty and integrity. He commenced life a poor boy, but is now surrounded by every comfort. Although seventy-five years of age, he still manages his farm, and bids fair to live yet many years. Judge Stevens remained in his native State until thirteen years of age, attended the common schools, and later entered Northfield Academy. After coming to Iowa he attended the schools at Cedar Rapids, Belle Plain and Grinnell. On the opening of the Iowa State Agricultural College in 1868 he entered the freshman class, and graduated from that institution in 1872. During the vacations he improved his time by teaching school and reading law. After graduating in the civil engineering course with the degree of B. S., he went to Belle Plain, studied law with Frank G. Clark (now of Cedar Rapids), and was admitted to the bar in October, 1873, at Vinton, Iowa. On the 25th of November of the same year he came to Ames, and opened a law office in partnership with Daniel McCarthy, continuing with him for a number of years. His first official position was city recorder, and next city attorney. In 1878 he was elected district attorney of the Eleventh Judicial District, consisting of eight counties, and was re-elected to the same office in 1882. Four years later he was elected district judge of the same district, and this office he is still holding. He is a prominent citizen of the county, and is respected and esteemed for his sterling integrity, sober, sound judgment and progressive ideas. He was married on August 10, 1876, to Miss Rowena E. Edson, a native of Wisconsin. They were schoolmates at Ames College for three years, and Miss Edson engaged in school teaching from 1873 up to the date of her marriage. Six children are the fruits of this union: Ollie E., Genevieve, Edith, Imogene, John E. and Thaddeus. The Judge is a member of the Blue Lodge, Chapter and Commandery of the Masonic Order. He is also a member of the K. of P. and others. He is the owner of half a section of land, well stocked with a high grade of horses and cattle, and his commodious house and other buildings indicate a progressive owner. Mrs. Stevens has been president of the Dorcas Society, in the interests of the sick and afflicted, for a number of years, and is always ready to assist and relieve suffering humanity.