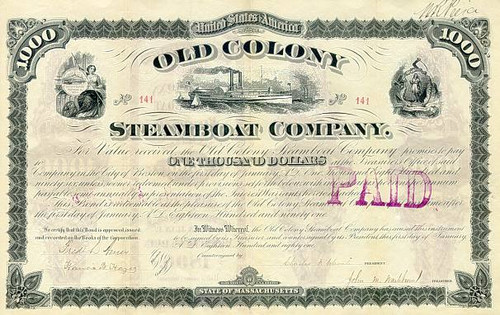 Beautifully engraved Bond certificate from the Old Colony Steamboat Company issued in 1881. This highly desirable certificate has an ornate border around it with three vignettes including the Steamboat Vignette in the center. This certificate is handsigned by the company's officers including Charles F. Choate, as President, John M. Washburn, as Treasurer and Frederick L. Ames, as a member of the Finance Committee. This nice looking certificate is over 124 years old.

Certificate Vignette
Frederick L. Ames (June 8, 1835 - Sepetmber 13, 1893) signed the certificate as part of the Finance Committee. He was the son of Oliver Ames, Jr. A powerful Harvard Graduate, he own a lot of real estate in the Boston area including the Ames Building. He became Treasurer of Oliver Ames & Sons in 1876. His father President of Union Pacific Railroad. Frederick L. Ames was very powerful in industrial circles, and spent of his time and resourses with the Home for Incurables, Unitarian Society, Massachusettes School for the Blind, Perkins Institute, McLean Insane Asylim, and the Children's Hospital. He was a leader for 30 years in the Massachusettes Horticultural Society and a willing contributor to the Arnold Arboretum of Harvard University. In the Bostonian Society's "Men of Progress" (1896 edition) Frederick L. Ames is described simply as a ``capitalist.'' Already flush from his family's business, Ames Manufacturing, he expanded his fortune by investing in Western railroads. A staunch Republican, Ames was drafted by his party to run for state Senate and was elected in 1872 - completely against his will. Charles F. Choate was involed with other companies including the FALL RIVER, WARREN AND PROVIDENCE RAILROAD COMPANY as a Director and the OLD COLONY RAILROAD COMPANY as a Director. He was the nephew of Rufus Choate 1799-1859 American lawyer and leading trial lawyer of his day. Rufus was born in Essex, Massachusetts and a famous orator and leader of New England bar and a U.S. congressman from Massachusetts 1831-34 and U.S. Senator 1841-45. Charles' brother was Joseph Hodges Choate (1832-1917) who was a U.S. lawyer and diplomat, born in Salem, Massachusetts and Ambassador to United Kingdom 1899-1905 and delegate 1907 to Hague International Peace Conference. He was in charge of prosecuting the Tweed Ring. John M. Washburn was also the Treasurer for the OLD COLONY RAILROAD COMPANY and the FALL RIVER, WARREN AND PROVIDENCE RAILROAD COMPANY. Company History 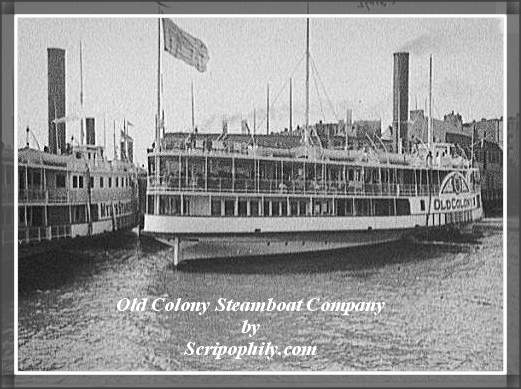 Boston, Newport & New York Steamboat Co. was sold to the Narragansett Steamboat Co. forming the Fall River Line in 1869 under Jim Fisk Jay Gould became President in 1872 Gould did not share his predecessor's fascination with steamboats and sold the Fall River Line to the Old Colony Railroad in 1874. This created the Old Colony Steamboat Company. The members of the Board included Silas Pierce, Jr., Boston; Benj. Finch, Newport; T. J. Borden, C. P. Stickney, Fall River; Albert Terrill, Weymouth; Oliver Ames, Easton; Wm. Borden, New York. (1874) J. P. Morgan of the New York, New Haven & Hartford Railroad arranged to lease the Old Colony RR and its steamboat company in 1893. The New Haven's maritime operation at this time was called the Marine District. The New England Navigation Co. was set up by the NYNH&H to manage all of its Steamship subsidiaries. On December 10, 1904, the properties of the New Haven Line, Bridgeport Line, Norwich Line (in existence since 1860), Block Island Line and Providence Line were transferred to the New England Navigation Company.