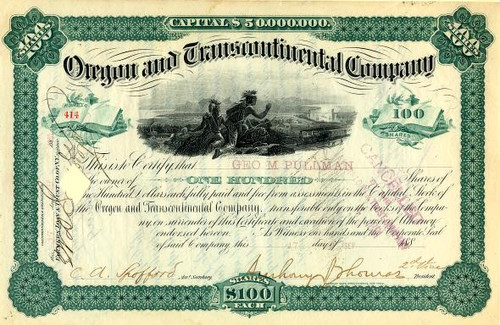 Beautiful certificate from the Oregon and Transcontinental Company issued in 1880's. This historic document was printed by the American Banknote Company and has an ornate border around it with a vignette of indians overlooking the country, oceans, rivers, mountains, farms, towns, miners and trains. This item is handsigned by the company's officers and is over 120 years old. It has a period diamond cancellation on the left. The certificate was issued to George Pullman and signed by him on the verso. 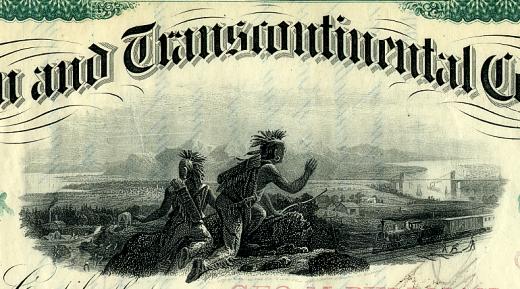 Certificate Vignette
The Oregon and Transcontinential Company was a holding company organized by Henry Villard. They controllled the Northern Pacific and Oregon Railway and Navigation Company which was a dominant force among railroads in the Northwest. Pullman, George Mortimer, 183197, American industrialist and developer of the railroad sleeping car, b. Brocton, N.Y. As a young man he became a cabinetmaker, and after he moved (1858) to Chicago he began converting (1859) old railroad coaches in order to facilitate long-distance traveling. Some five years later he built the Pioneer, the first modern sleeping car. Gaining great wealth from his invention, he founded (1867) the Pullman Palace Car Company. The town of Pullman, now part of Chicago, was built (1880) for the company and its workers. One of the most famous of all U.S. strikes was that at Pullman in 1894.