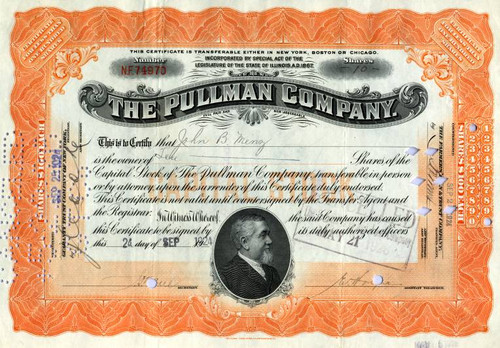 Beautiful certificate from the Pullman Company issued in 1924. This historic document was printed by the Republic Bank Note Company of Pittsburgh, Pa. and has an ornate border around it with a portrait of George Pullman. This item has the written signatures of the Company's Secretary and treasurer, and is over 90 years old. 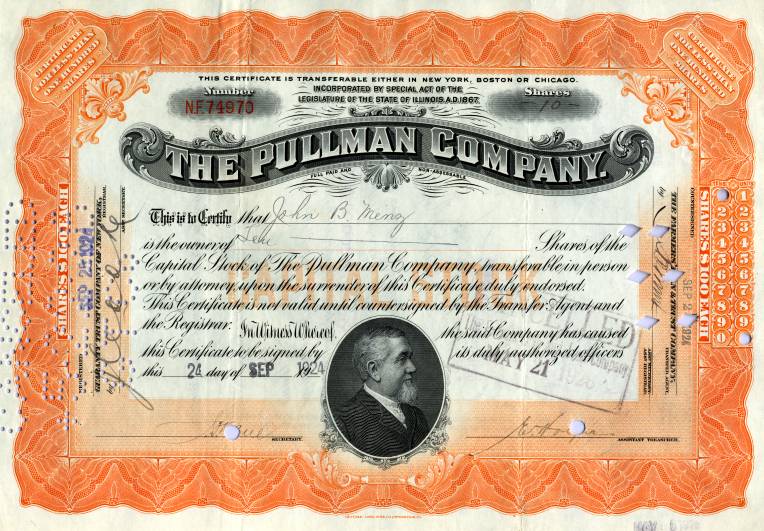 Certificate
George Pullman never forgot his first overnight train ride. It was the early 1850s, and he was making the trip from Boston to Westfield, Massachusetts. Like everyone else he spent the night lying fully clothed on a rough mattress. Like everyone else he didn't sleep much. This was no way to travel, he thought, and began to consider the cash to be made in creating comfort. Pullman had ideas and ambition, and a few years later -- now in Chicago -- he had money, a stake of $20,000 made from raising buildings in the city's flood-prone neighborhoods. His greatest feat, in 1858, involved elevating the stylish Tremont Hotel. After workmen installed heavy beams in the basement of the four-story building, Pullman supervised the simultaneous turning of 5,000 jackscrews by 1,200 men. Slowly the Tremont rose to higher ground. A man who could move hotels wasn't likely to be cowed by the challenge of building a better train car. Besides, almost anything would be an improvement. Rail travel was a miserable experience, a back-battering ride on stiff benches in cars thick with dust in the summer and smoke from the wood stove in the winter. Even when some rail lines began offering overnight accommodations, passengers were given little more than cots or mattresses and little privacy. Pullman saw a market there: the growing number of businessmen traveling from city to city. He began to rebuild two coaches, dividing the oversized cars with curtains into 10 sleeper sections. With the cleverness of the cabinetmaker he had once been, Pullman hid his beds in upper berths that could be opened at night, and similarly installed hinged chairs that could swing back up to the ceiling. He built a linen closet and toilets at both ends. He mounted everything on four-wheeled trucks with heavy iron wheels and springs, softening the ride. But perhaps most important, Pullman paid enormous attention to detail, lining his sleepers with rich cherry wood and covering the seats with plush upholstery that seemed even softer in the glow of oil lamps. By the end of 1858 his sleepers -- which he considered experimental -- were carrying somewhat confused riders. Most couldn't fathom actually trying to sleep on a train. When they realized this was indeed possible, they still had to be convinced that they could remove their shoes. No one would steal them, the conductors promised. George Pullman's sleeper was a thing of beauty. But he was just getting started. Soon he would create a luxury car the likes of which had never been seen.