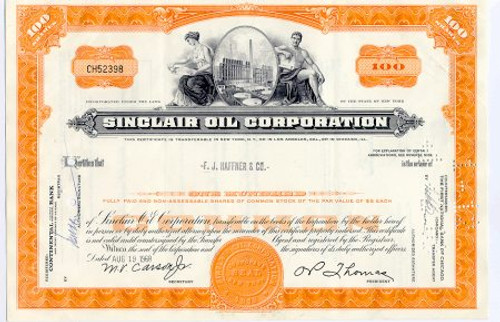 Beautifully engraved Stock Certificate from the Sinclair Oil Company issued no later than 1968 for shares of Common Stock. The certificate has an ornate border with a vignette of an oil refinery bordered by two allegorical figures. This certificate is 41 years old and has the printed signatures of the company's officers. The largest part of Salt Lake City businessman Robert Earl Holdings empire, Sinclair Oil was founded in 1916 by oilman Harry Sinclair. Formed from the assets of eleven small petroleum companies, Sinclair is one of the oldest continuous names in the oil business. The first corporate emblem, SINCO, was registered November 1, 1916. The company includes more than 2,500 stations and convenience stores, the Little America chain of hotels, two ski resorts(Sun Valley in Idaho and Snowbasin in Utah), and one of the largest ranching operations in the US. Sinclair produces gasoline locally ( also refining it and transporting it) and sells it in the Rocky Mountain states, supplying its gas stations more cheaply than most other companies can. Sinclair operates three of the most up-to-date refineries in western America, supplying customers the highest quality Sinclair gasoline's, diesel fuel, and jet fuel. The Sinclair Refinery near Rawlins, Wyoming, is one of the West's longest-running industrial plants, yet Sinclair has made it one of the most modern refineries in the Rockies, producing 60,000 barrels of petroleum products per day. Sinclair's Tulsa Refinery joined the Sinclair system in 1983. This 60,000 barrel-per-day refinery utilizes the latest refining technology to produce high octane gasolines. Sinclair's Little America Refinery in Casper, Wyoming, refines 20,000 barrels of petroleum products per day. Over 1,000 miles of pipeline are operated by Sinclair in the Rocky Mountains, moving crude oil to Sinclair refineries and finished product to our marketing terminals.