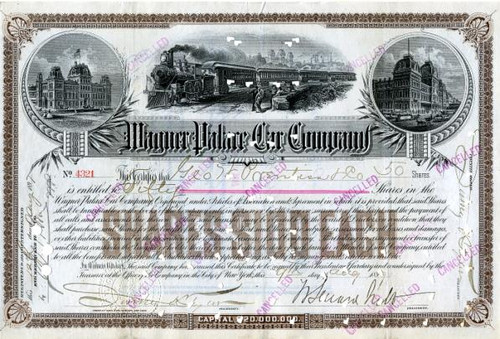 Beautifully engraved certificate from the Wagner Palace Car Company issued in 1898 or earlier. This historic document was printed by the American Banknote Company and has an ornate border around it with three vignettes of 1.-Upper left, is of the original Union Station in Chicago that burned in the Chicago fire. 2.-Upper right, is the original Grand Central Terminal in New York City. 3. -Center is a passenger train, with sleeping cars, probably leaving New York for Chicago as Grand Central Terminal is in background along with the Brooklyn Bridge. This item is hand signed by the Company's President, William Seward Webb, and their Secretary ( James. D. Taylor ) and is over 119 years old. Punched and stamped cancelled.

Certificate Vignette
WAGNER PALACE CAR COMPANY. Major competitor to the Pullman's Palace Car Co. formed in 1866 as the New York Central Sleeping Car Co. and renamed the Wagner Palace Car Co. in 1886 after its deceased founder, Webster Wagner. Controlled by Vanderbilt interests and run by William Seward Webb, a Vanderbilt son-in-law, Wagner worked to expand its linesand spent lavishly on new equipment in an attempt to compete With Pullman. That attempt ended in 1899, when the Pullman's palace Car Company purchased Wagner for 36.5 million dollars. Dr. W. Seward Webb (January 31, 1851-October 29, 1926) was a son of Civil War Gen. James Watson Webb (1802-1884). He studied medicine in Vienna, Paris and Berlin. Returning to America, he entered the Columbia University College of Physicians and Surgeons and graduated from there in 1875. For several years he practiced medicine, and then forsook the profession for finance at the behest of his wife's family, establishing the Wall Street firm of W. S. Webb & Co. In 1883, he married Eliza Osgood Vanderbilt, daughter of William H. Vanderbilt. Eliza's brother George went on to create Biltmore, one of America's grandest country estates. In 1883 Webster Wagner, the president of the Wagner Palace Car Company, was crushed between two of his own railroad cars. Vanderbilt owned a controlling interest in the company, and asked his new son-in-law to take over the firm. William Seward invited his brother H. Walter Webb to join him, which started them both on careers in the railroad business. The Wagner Palace Car Company was subsequently merged with the Pullman Company. Dr. Webb later became President of the Fulton Chain Railway Company, Fulton Navigation Company, Raquette Lake Transportation Company. He was the builder and President of the Mohawk and Malone Railway. His railroads were instrumental in opening the Adirondacks to the tourism rush of the mid- to late 19th century. The Webb property at Shelburne, Vermont was created from more than thirty separate farms on the shores of Lake Champlain and is known today as Shelburne Farms. The property is a National Historic Landmark, and one of the main concert sites of the Vermont Mozart Festival. The former Webb estate has stunning views and some of the grandest barns of any Guilded Age property. A great horseman, Dr. Webb had a fine collection of carriages that is on display today at the Shelburne Museum. The Vanderbilt Webb's other country estate was an Adirondack Great Camp named NeHaSane, a game preserve of some 200,000 acres (800 km²), much of which was later donated to the State of New York to become part of the Adirondack Park. The town of Webb, New York in the park is named after him. Dr. Webb served as Inspector General of the Vermont militia with the rank of Colonel. He served a term in the Vermont Legislature in the 1890s. He was a founder and former President of the Sons of the American Revolution. The Webbs for thirty years lived at 680 Fifth Avenue, New York. This house, a wedding gift from William H. Vanderbilt to his daughter, was sold in 1913 to John D. Rockefeller. Dr. Webb was survived by his wife, Lila Vanderbilt Webb, three sons - J. Watson, Seward, and Vanderbilt - and one daughter, Frederica. History from Wikipedia and OldCompanyResearch.com (old stock certificate research service).