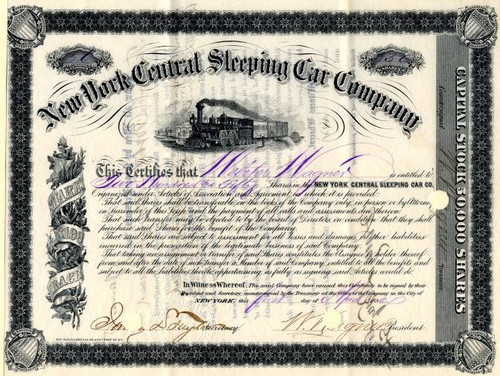 Beautiful certificate from the New York Central Sleeping Car Company printed in the 1880. This historic document was printed by the Hytchlith Company of New York and has an ornate border around it with a vignette of an steam locomotive. This item has the signatures of the Company's President, Webster Wagner and Secretary, and is over 131 years old. The certificate was issued to Webster Wagner. Punched cancelled.

Certificate Vignette
The sleeping car or sleeper (often wagon-lits) is a railway/railroad passenger car that can accommodate all its passengers in beds of one kind or another, primarily for the purpose of making nighttime travel more restful. The first such cars saw sporadic use on American railroads in the 1830s and could be configured for coach seating during the day. Some of the more luxurious types have private rooms, that is to say fully and solidly enclosed rooms that are not shared with strangers. In the United States today, all regularly scheduled sleeping car services are operated by Amtrak. Amtrak offers sleeping cars on most of its overnight trains, using modern cars of the private-room type exclusively. In Canada, all regularly scheduled sleeping car services are operated by Via Rail Canada, using a mixture of relatively new cars and refurbished mid-century ones; the latter cars include both private rooms and "open section" accommodations. Wagner Palace Car Company / New York Central Sleeping Car Company The Wagner Palace Car Company began as the New York Central Sleeping Car Company, founded in 1858 at New York City by Webster Wagner (1817-1882) in cooperation with Commodore Cornelius Vanderbilt, whose New York Central was the primary user of the four original coaches. Wagner learned the wagon-making trade from his elder brother, with whom he formed a partnership. When that business failed, he become a station agent for the New York Central in his home town of Palatine Bridge, New York, where he apparently came to the attention of the Commodore. In 1869, the Gates Sleeping Car Company was absorbed and the firm reorganized as the Wagner Palace Car Company. Gates had been one of the earliest--if not the earliest--of the sleeping car companies. Its bunk-type cars had been in operation on the Lake Shore Railroad as early as 1858. About 1870 Wagner negotiated a deal with Pullman to use its berths in the Wagner cars, with the understanding Wagner would confine its operations to the NYC. But in 1875, when Pullman's contract with the Michigan Central (a NYC subsidiary) expired, Wagner persuaded them to switch to Wagner cars. Pullman sued. The suit was settled out-of-court. Webster Wagner died in 1882 aboard one of his own sleeping cars in a terrible rear-end collision. History from Wikipedia and OldCompany.com (old stock certificate research service).