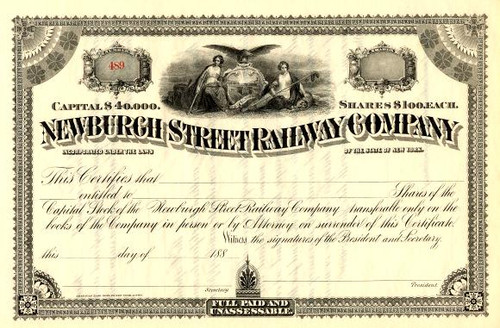 Beautifully engraved RARE unissued certificate from the Newburgh Street Railway Company issued in the 1880's. This historic document was printed by American Bank Note Company and has an ornate border around it with a vignette of two allegorial women surrounding a seal with an eagle on top.

Certificate Vignette
The Newburgh Street Railway obtained its franchise in 1886 to build a surface road from a point near the western end of the City to the Union Depot (down near the river front) and to extend the line from the corner of Water and Third Streets along Water St. to near the northerly line of the City." the line was formally opened Dec. 23, 1886, between the Union Depot and West Newburgh.