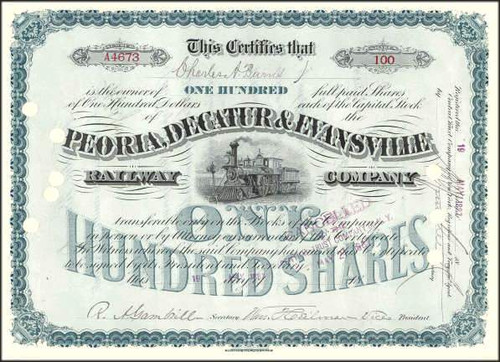 Beautifully engraved Certificate from the Peoria, Decatur & Evansville Railway Company issued in the 1880's. This historic document was printed by the Franklin Banknote Company and has an ornate border around it with a vignette of old train #24. This item is hand signed by the company's officers and is over 116 years old. 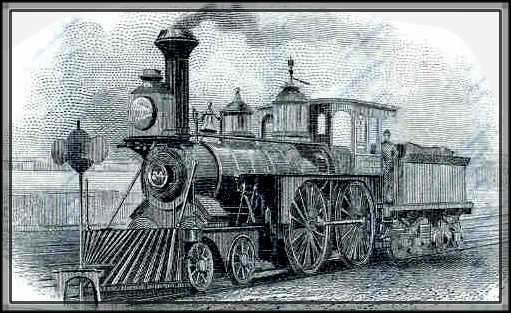 Certificate Vignette
The Peoria, Decatur and Evansville Railway (PD&E) can be traced back to at least 1857, when two charters were granted, one in Illinois and the other in Indiana, for a line between Mattoon Illinois and Mount Vernon Indiana. The main force behind the PD&E however was the Pekin, Lincoln and Decatur Railroad, which was chartered in 1861, less than two months before the Civil War. The Civil War stopped work on hundreds of railroads in the United States. And work on the Pekin, Lincoln and Decatur was no different. It was not until 1870 that any of the track was put in place, starting at Pekin Illinois. However, work under President Colonel Robert B. Latham progressed quickly, reaching a connection with the Illinois Central Railroad at Decatur Illinois in October of 1871. A short time later, the Pekin, Lincoln and Decatur was leased to the Toledo, Wabash and Western Railway, which defaulted in on payments in 1876. A new company emerged that year, the Pekin, Lincoln and Decatur Railway, and it set about expansion. The first push was to Peoria, roughly nine miles north of Pekin. It achieved access to Peoria in 1878, first by leasing one line, and then obtaining trackage rights on another. In 1880, this access would be replaced by part ownership of the Peoria and Pekin Union Railway. In 1879, the Pekin, Lincoln and Decatur pushed southeast by gaining control of the Decatur, Mattoon and Southern, a line from Decatur to Mattoon Illinois, becoming known as the Peoria, Decatur and Evansville Railway in the process. The following year, the PD&E purchased the Grayville and Mattoon Railroad which ran from Mattoon to Parkersburg Illinois. The same year it purchased the charter in Indiana, changing the terminus to Evansville Indiana. In 1881, the PD&E completed the line from Parkersburg to Evansville, with a six mile branch line from Stewartsville to New Harmony Indiana. In 1886, Daniel J. Mackey gained control of the PD&E. For some time Mackey had been in control of the Evansville and Terre Haute Railroad, which ran north out of Evansville. He aggressively protected that railroad's interest, by buying or gaining control of every railroad running north out of Evansville, including the PD&E. This also explains why the PD&E purchased the Chicago and Ohio River Railroad in 1893. This line ran from Sidell to Olney Illinois with a connection just north of there with the PD&E. While this line was far from Evansville, apparently Mackey felt it could be used to enter Evansville from the north. That is, if anybody could ever make the line profitable. It was not, and the PD&E entered receivership the following year. In 1898, the receiver for the PD&E sold the Sidell to Olney line. Two years later he sold the rest of the PD&E at auction to the Illinois Central Railroad. The PD&E was a good fit for the Illinois Central, and the lines served it well for the next 76 years. In 1976, the New Harmony branch was taken up. Six years later, another part just a few miles southeast of Mattoon was scrapped. The remaining portion of the line from Mattoon to Evansville would sold off in chunks by 1990, with most of it being abandoned by 1999. The Mattoon to Peoria segment would remain with the Illinois Central, until the Illinois Central itself was merged into the Canadian National Railway in 1999. In 2004, Canadian National sold its interest in the Peoria and Pekin Union. However, the rest of the old PD&E line is still operated by them. Occasionally still being referred to by crews as "the old PD&E". History from Wikipedia.