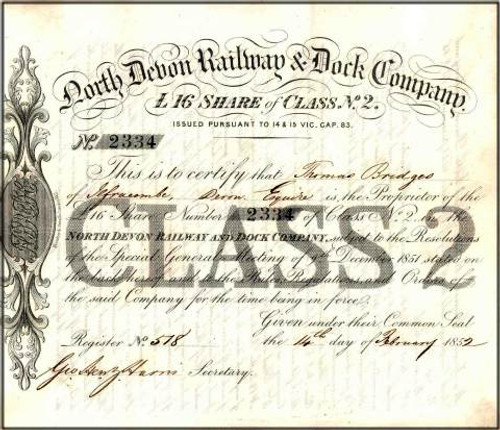 Beautifully engraved RARE EARLY English railway certificate from the North Devon Railway and Dock Company issued in 1852. This historic document has an ornate border around it with an embossed seal showing an early train and sailing vessels. This item is hand signed by the Company's Secretary and is over 151 years old. The certificate was issued to Thomas Bridges. The railway was a result of the statutes from The North Devon Railway and Dock Act, 1851 ... certain deviations in the Taw Vale Extension Railway. - [14-15 Vict. cap. 83]. - London : Eyre & Spottiswoode , 1851. - pp[1185]-1206 ; 26cm. - Devon no: D01007638x (Record no: 18585) The Taw Vale Railway opened in 1848 from Barnstaple to Fremington Wharf for horse-drawn coal and other goods traffic and was opened to passenger trains when the Extension Railway reached Bideford by way of Instow in 1855. The Taw Vale line, the first railway in North Devon, was initially separated, by a 31 mile gap, from the main line which, at that time, was no nearer than Crediton. As this main line was built to the broad gauge, then the Taw Vale Railway (name changed to North Devon Railway in 1851) and the North Devon Railway extension from Barnstaple to Crediton followed suit. Tourism in Devon was established in the mid eighteenth century, with Exmouth and Teignmouth developing in the 1750s, and Sidmouth, Dawlish and Ilfracombe in the 1770s. The facilities at this time were very rudimentary, although cures for a variety of illnesses and ailments by sea bathing and the imbibing of sea water were promoted with great enthusiasm. Exmouth introduced the bathing machine in 1759, with Teignmouth following a few years later in 1762. The declaration of war with France, which meant that travel on the continent became virtually impossible, and the desire of the Englishman to tour or winter in a mild climate altered the situation radically, and forced them to look elsewhere for these pursuits. The newly emerging watering places of the South West were to fulfil these needs. Even the threat of war brought new and immediate economic benefits to Devon. The naval facilities built at Devonport and later the breakwater, became objects of interest to the tourist, as they gazed on the with a mixture of patriotic pride and an appreciation of our industrial expertise. Roads in the county were in a poor state. As late as the 1750s Devon had no turnpike trusts and in 1760 it still took four days to travel the 170 miles from London to Exeter. As coaching and the roads improved the time taken to travel this time was greatly reduced, (1764: 48 hours, 1783: 32 hours and 1785: 24 hours) and by the end of the coaching era the Exeter Telegraph had reduced the journey time down to 17 hours. But even after arrival at one of the major towns, travelling elsewhere in the county could be very slow. North Devon ( Taw Vale Route ) was particularly difficult to reach, with coach journeys from Exeter to Barnstaple (39 miles) taking almost the whole day. It was not until the 1830s that Ilfracombe and the other North Devon resorts were accessible on good roads, many earlier visitors had preferred to travel by sea to reach them, using the steam packets from Bristol and Swansea. All this was to change with the arrival of the railways, which opened up the county and its watering places to a wider cross-section of society. From Exeter the South Devon Railway had by the end of 1848 opened up the resorts of Torquay and Plymouth to an influx of tourists. In 1854 the North Devon railway took the line up to Barnstaple and by the 1870s a network of branch lines connected the smaller towns like Dartmouth, Exmouth, Seaton, Sidmouth, Ilfracombe and Bideford to the main lines. With the increase of visitors there came an improvement in the economy, allowing local entrepreneurs to add better facilities for the visitor to enjoy. The Devon resorts were transformed from small fishing villages into sophisticated spas, with assembly rooms, libraries, theatres, promenades and purpose built accommodation, which not only attracted the sick but the fashionable as well. The climate was also a great attraction often being less severe and kinder to the infirm than elsewhere in the country. Works of literature also had an effect on the popularity of the region, and the descriptions of Devonshire scenery in the works of Charles Kingsley's Westward Ho! (1855) and R.D. Blackmore's Lorna Doone(1869) brought curious visitors to the region. In the 1860s a local entrepreneur created the holiday resort of Westward Ho! To capitalise on the popularity of Kingsley's novel. Tourism is still an important contributor to Devon's economy, indeed it has a major influence not only on the economic but also the social and environmental well-being of the area. The subsequent recirculation of this wealth within the local economy supports a whole range of ancillary manufacturing and service industries. Thereby a substantial portion of the country's employment has long been generated. Devon history is from the Devon County Council website.