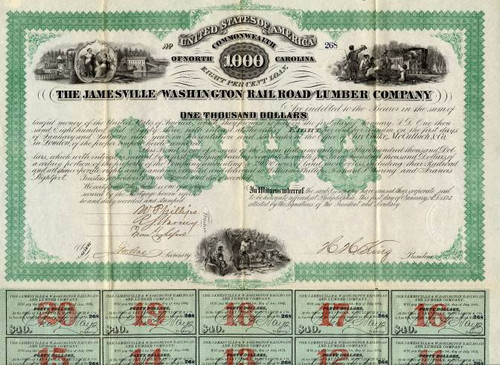 Beautiful certificate from the Jamesville and Washington Railroad Lumber Company issued in 1873. This historic document was printed by the American Bank Note Company and has an ornate border around it with a vignette scenic images from the rail road. This item has the original signatures of the Company's President, Secretary and Trustees and is over 139 years old.

Signatures
The Jamesville and Washington Railroad and Lumber Company was incorporated in 1869. By 1870, the first segment of a narrow-gauge railroad extended into the company's vast stands of timber south and east of Jamesville. Facetiously known as the "Jolt and Wiggle" for its uneven ride, the J&W made possible the expansion of large-scale timbering and small-scale farming into heretofore hinterlands in Jamesville and Griffins townships. The Jamesville and Washington Lumber and Railroad Company ran from Jamesville to Dymond City and later to Washington. In 1894, the road was acquired by Norfolk & Southern Railway. History from Wikipedia and OldCompany.com (old stock certificate research service)

Sutton Mining Company - Township of Sutton, county of Brome, district of Bedford in the Province of Canada - 1864