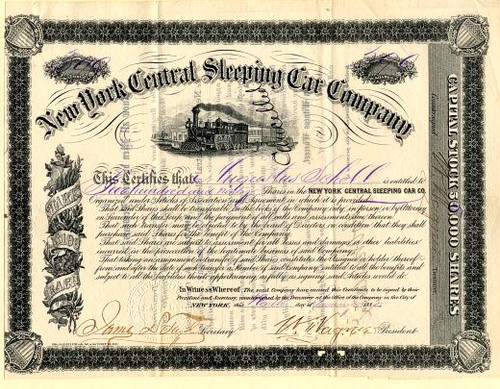 Beautiful certificate from the New York Central Sleeping Car Company issued in 1882. This historic document was printed by Hatch Litho Company and has an ornate border around it with a vignette of a steam locomotive pulling a sleeping car. This item has the signatures of the Company's President, W. Wagner and Secretary and is over 130 years old. The certificate was issued to Augustus Schell and signed on the back by his son, Robert Schell. Punched cancelled.

Certificate Vignette
Augustus Schell -- of New York, New York County, N.Y. Democrat. Delegate to Democratic National Convention from New York, 1860, 1876; Chairman of Democratic National Committee, 1872-1876. Augustus Schell was the postwar legal advisor for Vanderbilt's companies, Augustus' brother Richard Schell was the financial adviser, and his other brother Frederic Schell was Vanderbilt's stock broker. Augustus Schell had been the political boss of the secessionist wing of the New York Democratic Party, before and during the Civil War. He was the national chairman of the Breckenridge-secessionist Democrats in 1860. As Collector of the Port of New York in charge of U.S. customs there from 1858 to 1860. Schell replaced the pro-Union "Boss" Tweed as head of New York City's Democratic Party after a New York Times expose the campaign that destroyed Tweed.