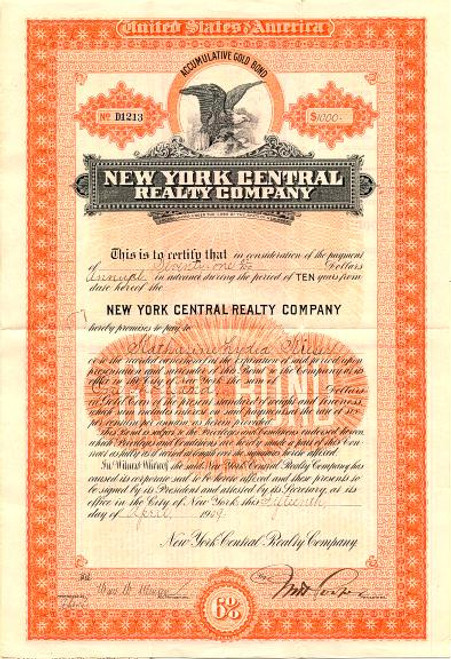 Beautiful Litho certificate from the New York Central Realty Company issued in 1909. This historic document was has an ornate border around it with a vignette of an eagle. The bond was payable in Gold Coins. This item is hand signed by the Company's President and Secretary and is over 96 years old. 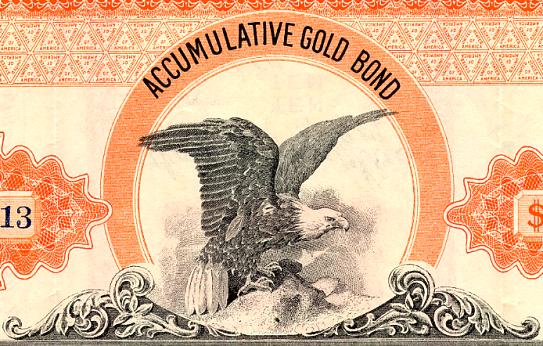 Certificate Vignette
Gold Bonds Many times Bonds were Payable in Gold or Gold Coin to give the impression that they were a more secure investment. In reality, they were not more secure since there wasn't any gold set aside as collateral for these bonds. On April 5, 1933, President Franklin D. Roosevelt signed Presidential Executive Order 6102 which invoked his authority to make it unlawful to own or hold gold coins, gold bullion, or gold certificates. The export of Gold for purposes of payment was also outlawed, except under license from the Treasury. On January 30, 1934, the Gold Reserve Act became law which made the ownership of gold illegal except for coins of numismatic value. As a result of this law, Bonds were no longer allowed to be Payable in Gold.