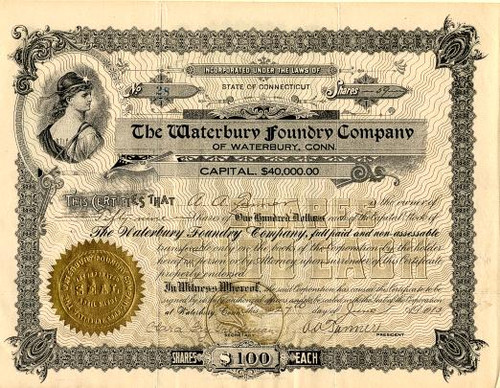 Beautiful stock certificate from the Waterbury Foundry Company issued in 1913. This historic document was printed by Waterbury Bank Note Company and has an ornate border around it with a vignette of an Lady Liberty. This item has the signatures of the Company's President, Arthur A. Tanner and Secretary, Clara Fry Tiedeman and is over 92 years old. Prior to becoming President, Arthur Tanner was the Company's Secretary and Benjamin Fry was the company's President. 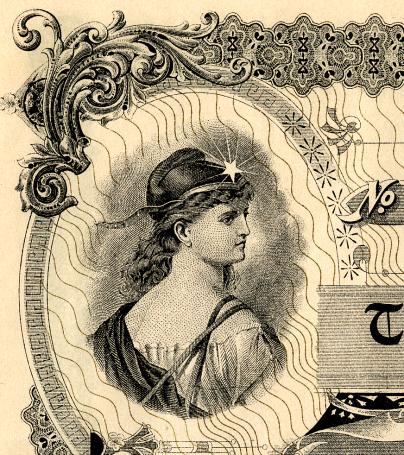 Certificate Vignette
Waterbury is a city located in New Haven County, Connecticut. As of the 2000 census, the city had a total population of 107,271. It is the fifth-largest city in Connecticut. The original settlement of Waterbury was in 1674 in the Town Plot section. King Philip's War caused it to be vacated and the location was changed to the Western part of the Green in 1677. Both sites are marked. The Algonquin name for the area was "Matetacoke" meaning "place without trees." It appeared as "Mattatock" in 1673, and "Mattatuck" in the General Court record of May 18, 1674. The name changed to Waterbury on May 15, 1686, when the settlement was admitted as the 28th town in the Connecticut colony. It then included all parts all or parts of the later town of Watertown, Plymouth, Wolcott, Prospect, Naugatuck, Thomaston and Middlebury. The name Waterbury was chosen because of all the streams flowing into the Naugatuck. Waterbury was incorporated as a city in 1853. Waterbury occupies 28.9 square miles. Its elevation is between 215 and 965 feet above sea level. "Quid Aere Perennius" is the inscription in marble above the City Hall entrance. It translates as "What is More Lasting Than Brass?" and was chosen by Frederick Kingsbury for his design of the Waterbury Seal in 1876. It was inspired by Horace's Book III, Ode XXX: "I have executed a monument which is more lasting than brass and more sublime than the regal elevation of pyramids which neither wasting the shower, the unvailing north wind, or an innumerable succession of years and the flight of seasons shall be able to demolish."