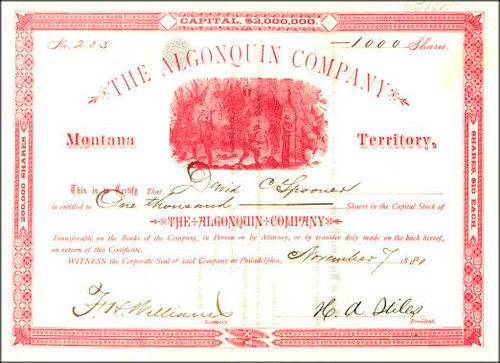 Beautifully engraved certificate from the Algonquin Company issued in 1881. This historic document has an ornate border around it with a vignette of men working in a mine. This item is hand signed by the Company's President and Secretary and is over 136 years old. The company was incorporated in the Montana Territory and the mine was located in Deer Lodge County. 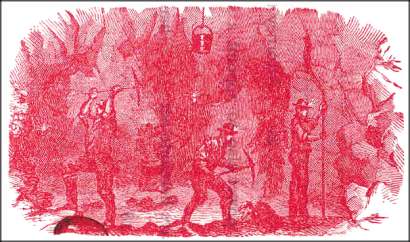 Certificate Vignette
Philipsburg Mining District Hasmark is the name of the town located next to the mine. It is located on Frost Creek and had a peak population in 1880 of about 90 people. The present attractions consist of five old cabins in various stages of deteriation, foundations of several other dwellings, and a larger log structure, presumed to be a saloon. Mines and Mills: In the time from 1865 until the 1960's, the number of miners varied from 1500 prospectors in 1867, to approximately 900 miners during the manganese boom from 1915 to 1920, to around 200 miners from 1920 to 1962. As a result, the area is a maze of tunnels, shafts, glory holes, and prospect diggings. One can see evidence of past mining in almost any part of the district, such as head frames, ore tins, mine dumps, and the remains of mills used to process manganese and silver. Very little restoration has been done and most of the area is in various stages of disrepair, the result of over 100 years of aging.