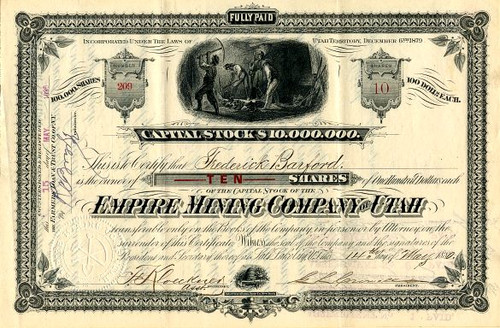 Beautifully engraved certificate from the Empire Mining Company of Utah issued in 1881. This historic document was printed by the American Bank Note Company and has an ornate border around it with a vignette of miners at work underground. Black border and print. Uncancelled. This item is hand signed by the Company's President ( G. L. Cornwell ) and Assistant Secretary and is over 128 years old. The certificate was issued to Frederick Barford. EF 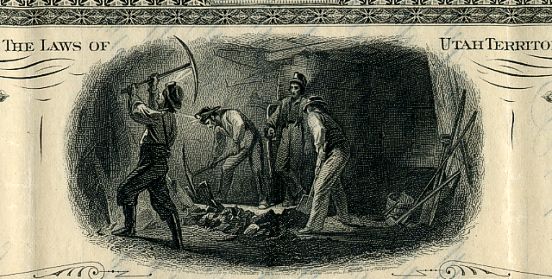 Certificate Vignette
June 1, 1880 The Empire Mining Company of Utah was incorporated in May, 1878. Its property comprises a group of fourteen overlapping locations 1 1/2 miles southwest of Park City and about half a mile west of the Ontario. The average size of these is 1,500 by 200 feet. The Clara Davis alone is developed to a considerable extent. This claim was discovered in 1871 ; but little was done, however, until the organization of the company. Since that time it has been worked by a large force until October, 1880, when operations ceased until the Utah Eastern railroad should be completed, which would lower the price of coal and lessen the expenses $60 per day. The company also owns a 20-acre mill site, 1 1/2J miles north of Park City, on which much grading had been done for the erection of a 30-stamp silver mill. Much of the machinery is on the ground,but financial troubles seem likely to prevent its completion. The capital stock of the company is $10,000,000 in 100,000 shares. History from Census Reports - Tenth Census. June 1, 1880 By United States Census Office. 10th Census, 1880, Francis Amasa Walker, Charles Williams Seaton, Henry Gannett and OldCompanyResearch.com.