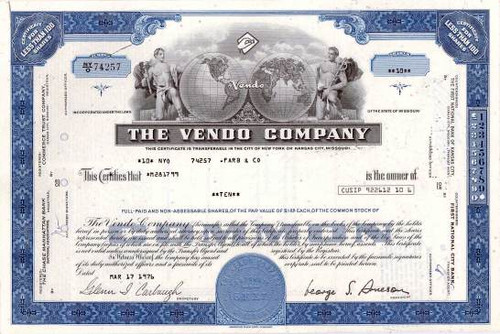 Beautifully engraved certificate from the Vendo Company issued in no later than 1978. This historic document was printed by the American Banknote Company and has an ornate border around it with a vignette of the company logo ( Hand putting money in a vending machine ) with allegorical men and globes. This item has the printed signatures of the Company's President and Secretary and is over 25 years old.

Certificate Vignette
The Vendo Company was founded in 1937 in Kansas City, Missouri, as a small manufacturer of a revolutionary vending mechanism for bottled soft drinks. Today the company is a global provider of vending machines. The Vendo Company of Kansas City was the largest manufacturer of airplane radar antennae during the Second World War--some 300,000 in all. For over 60 years, The Vendo Company has helped quench the world's thirst keeping beverages cold and readily available for consumers not only where they live, but where they work, play, shop, travel and relax. The beverage-vending machine, so universally recognized today, traces its roots back to the 1930's. The first machines were not coin-operated, but simple coolers packed with ice and bottles of soda and run on the honor system. That didn't necessarily denote a more honest time, but a lack of needed technology. When the first coin-operated machines appeared, they worked poorly, jamming frequently and accepting almost any kind of slug. Brothers Elmer F. and John T. Pierson changed all that. The Piersons purchased a patent for a simple, inexpensive and reliable vending lid. This lid could be locked on top of the Westinghouse and Frigidaire chest coolers already present in service stations and grocery stores, thereby converting them into vending machines. With $3,000 in start-up capital, the brothers started The Vendo Company in 1937 in Kansas City, Missouri. Joined by J.E. Hagstrom and his company, they developed the first truly workable vending system a lid called "The Red Top". The Red Top moved the delivery opening to the next bottle in the chest, rather than moving bottles through the ice. This innovation eliminated the jamming problem and made the machine simple and practical. It virtually created a major market and changed the world of beverage retailing. The 1941 attack on Pearl Harbor curtailed Vendo's production, like that of most other peacetime industries. Despite severe wartime restrictions, soft drinks were classified as "essential for soldier morale" by the U.S. War Department, and Vendo was authorized to produce 5,000 "Red Tops" for military training camps and war plants. Vendo further supported the nation's war effort by producing radar detection systems and associated electronic equipment. The company earned an impressive seven Army-Navy "E" awards for excellence in fulfilling Army and Navy production contracts. The end of the war brought about a prosperous new era for America and for the vending industry. In the 50s the industry "exploded" both in geography and in scope. As more Americans began to move into the suburbs, soft drink bottlers rushed to extend their vending operations. Vending also began to expand internationally, with Vendo products being shipped to 20 different countries by 1956. Beverage vending machines had a new look in the 50s upright, streamlined units with round-cornered cabinets. Vendo built a giant new plant during this decade and introduced vending machines to support multiple products. These machines brought more variety to the public and allowed bottlers to significantly increase their volume. Vendo diversified its production in the 50s, developing machines to sell packaged snacks, fresh foods, coffee, milk and ice cream. The company tested automated convenience stores, restaurants and drive-in refreshment stations serviced totally by vending machines. Vendo first established itself in Fresno in 1956 by merging with its former rival, the Vendorlator Manufacturing Company. Like Vendo, Vendorlator had been in business since 1937. The company was founded as a co-partnership by Harry S. Childers and Howard M. Tripp. While Vendo had mainly served Coca-Cola bottlers before the merger, Vendorlator counted Pepsi-Cola and Royal Crown among its principal customers. After the merger, the combined companies became a major supplier for the entire soft drink industry. The Vendo Company went public in 1956, and company stock began trading on the New York Stock Exchange in 1961, where it remained for over 20 years. The 60s were a time of worldwide expansion for Vendo. Mitsubishi Heavy Industries began manufacturing Vendo beverage coolers in Japan in 1962. Vendo's international division also had licensed manufacturing operations in England and Mexico. In 1964 it began new subsidiaries and contract manufacturing facilities in Belgium, Australia, Italy, Germany, France and Canada. Always the industry pioneer, in the late 60s Vendo was one of the first to introduce vending machines for canned beverages. These machines were a great advantage for bottlers, who could fit nearly twice as many cans as bottles in a machine of the same size. The energy crisis of the 70s struck a blow to many American industries, and vending was no exception. Vending machines were considered nonessential and many companies cut back on their purchases. Also, due to the oil crisis and many factory closings, fewer machines were placed in factories and gas stations. In the mid-70s, Vendo left Kansas City and sold off its snack machine division. Retaining only its cold drink machine line, the company split its operations between the Fresno plant and a new facility in Corinth, Mississippi. In 1981, Vendo concentrated all of its domestic manufacturing and administrative offices in Fresno and, in 1988, was acquired by the Sanden Corporation, Japan. For more than 50 years Sanden has been a leading manufacturer of automotive air-conditioning compressors and systems, vending machines, commercial freezers and refrigerated showcases. The company has infused Vendo with superior technology, state-of-the-art equipment and research facilities. The 80s and 90s have brought continued technological innovation and global expansion for Vendo. Some of these advances include programmable electronic vending machines, high-capacity machines that accommodate plastic bottles in a wide variety of sizes and shapes, and machines that accept debit cards and "smart cards." Today, Vendo employs almost 800 people in Fresno and works with numerous Vendo sales, service and manufacturing operations throughout the world. Vendo continues to expand its reach into markets such as Africa, the Middle East, Latin America and Eastern Europe. Historical information is from the company's marketing materials.