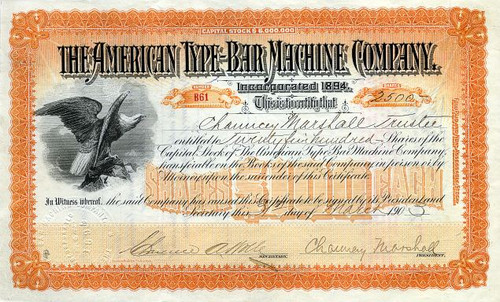 Beautiful certificate from the American Type - Bar Machine Company issued in 1903. This historic document was printed by the Franklin Banknote Company and has an ornate border around it with a vignette of an eagle. This item has the signatures of the Company's President, Chansey Marshall and Secretary, Maurace A. Mill, and is over 106 years old. 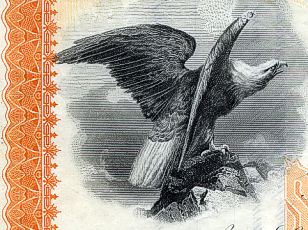 Certificate Vignette
THE AMERICAN TYPE-BAR MACHINE COMPANY, acquiring and developing certain inventions and improvements pertaining to the art of printing, manufacturing, selling, type-bar machines. Principal office. New York City; charter issued November 12, 1894, expires January 1, 1940. corporators, Robert T. Spencer, Francis A. Brvant both of Brooklyn, New York, Louis O. Angevine, East Orange, New Jersey, Albert E. Borden, Jr., Englewood, New Jersey, Walter R. Friederichs, Jersey City, New Jersey: capital subscribed, $500.00; amount paid in, $50.00; capital authorized, $"1,000,000.00; par value shares, $100.00. The company owned the patents 911,954 and 911,955 invented by Darien W. Dodson, a citizen of the United States, residing in Hartford, in the county of Hartford and State of Connecticut, have invented certain new and useful Improvements in the Art of Making Character-Bars, of-which the following is a specification. According to the patent office, this invention pertains to the manufacture of impression-faces or characters, and especially to the manufacture of an integral line thereof, such, for instance, as embodied in some forms of linotypes or typebars. The present invention relates in particular to a method of making characters, for example, printing types, from a blank of proper material, and to a method of making a series of such types from'or on a single-piece blank to form an integral line of type which it is intended shall constitute the printing portion of a linotype or typebaradapted for use in the typographic art for printing a line of composition, the invention including also as one of its features a typebar or linotype so formed. In the printing art as heretofore practiced a line of printed composition has usually been produced from a line of separate composed types, or from a linotype formed by casting from a succession of properly assembled matrices, or the printing has been done from a stereotype, electrotype, or similar impression member. The present invention contemplates the manufacture of printing types or other characters or impression-faces, and the coordination of such types etc. into a line of printing members in a radically different manner; there being involved herein a mode of type production heretofore unknown in the art for obtaining results which have been secured up to the present time by the methods above referred to. That is to say, the practice of the present invention enables a typebar to be produced embodying a line of characters formed from a one-piece blank by shaping without the necessity of using extraneous heat successive portions of the blank to form therein a series of types having their printing faces in a given plane, the typebar ..... The information below was found in Yahoo groups: Armstrong is a name variant of the American. I believe it was made in the UK. Most common are models No. 7 & 8 in the American. The American had in the type-bar machine three models (the No. 5, 7 & 8) that I have read about or seen. I have never seen a number 5 machine. The previous index machines Model No. 1 & 2 American. Not sure of other model numbers. I don't believe the index machines were numbered. I have never seen an Armstrong. I would have remember for the name as it is a related family name. The earliest ad I have for the American Type-bar machine is from McClure's Nov. 1901, price $40.00, Broadway, New York. Shows a model number on the front edge of the top but can't make out a number. In an ad from Munsey's May 1903 The American No. 5 appears. The model number appears on the front bar forward of the keyboard. In subsequent ads the No. 5 appears on the top front edge. In Munsey's Nov. 1904 the No. 2 (index) sells for $10.00, No. 5 (type-bar machine) sells for $40.00 and the No. 7 is added but at a cost of $50.00. No images with this ad. The No. 8 first appears in an ad from Progress, June 1909 for $35.00 (reduced price) but with no image. The No. 7 appears to be the most advertised. I have a No. 2 (index) and a No.8 in the 20,000+ range. Not sure how the serials ran with this machine. The Index machines I believe had no serials. The No. 1 is not as common as the No. 2.