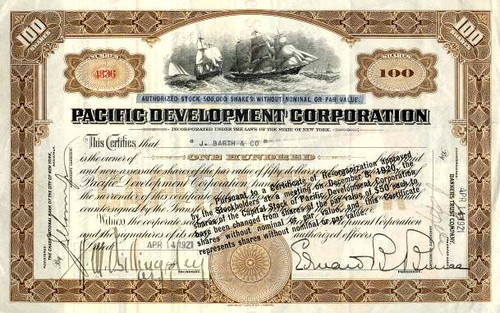 Beautifully engraved certificate from the Pacific Development Corporation issued in 1921. This historic document was printed by the American Bank Note Company and has an ornate border around it with a vignette of clipper ships sailing in stormy seas. This item is hand signed by the Company's President ( Edward B. Bruce ) and Secretary and is over 83 years old.

Certificate Vignette
Edward Bruce (1879-1943) A successful lawyer and businessman, Edward Bruce later turned to painting when he went to Italy for six years of art study and then returned to the United States in 1929. By that time, he was nationally recognized for his painting. He was born in Dover Plains, New York and began painting landscapes at age 14 but did not pursue that talent until later. He got his law degree from Columbia Law School in 1904 and practiced law in New York and Manila and then went into foreign trade in the Far East. He also became president of the Pacific Development Corporation of California. In 1929, he and his wife settled in California, living in Carmel, San Francisco, and Santa Barbara. He was active there until 1933 when he returned to the East and became an organizer in Washington DC of the Public Works of Art Project. Edward "Ned" Bruce work as Chief of one of Roosevelt's New Deal art programs, the Section of Painting and Sculpture (later the Section of Fine Arts), a program in the Treasury Department later reorganized under the Public Buildings Administration of the Federal Works Agency, established to administer the decoration of public buildings. Bruce was a key figure in Roosevelt's efforts to lift the country out of the Depression through relief projects, having directed one of the earliest programs, the Public Works of Art Project, from December 1933 - June 1934. Bruce was also a collector of Chinese paintings and sculpture, and the collection is a prestigious part of the Fogg Museum.