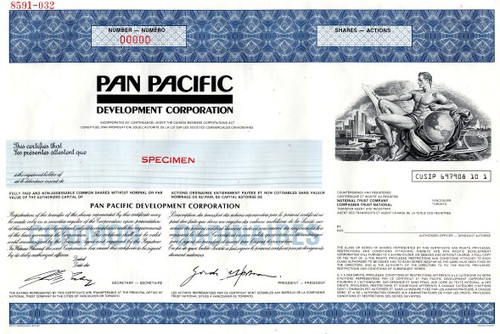 Beautifully engraved SPECIMEN certificate from the Pan Pacific Development Corporation. This historic document was printed by British American Bank Note Inc. and has an ornate border around it with a vignette of an allegorical reading leaning against a globe with the urban city in the background. This item has the printed signatures of the Company's President and Secretary. 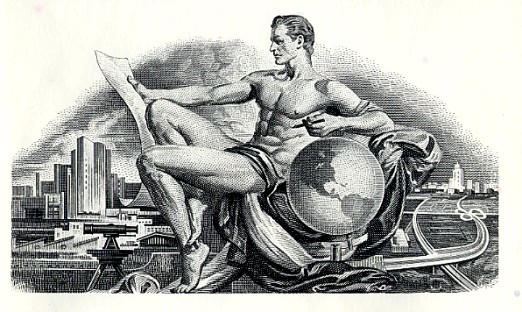 Certificate Vignette
Pan Pacific Realty Corporation was incorporated in the state of Maryland on April 16, 1997 (inception) and subsequently changed its name to Pan Pacific Retail Properties, Inc. (together with its subsidiaries, the "Company"). The Company was formed to continue to operate and expand the shopping center business conducted by Revenue Properties (U.S.), Inc. ("RPUS"), formerly known as Pan Pacific Development (U.S.) Inc., a wholly-owned subsidiary of Revenue Properties Company Limited ("Revenue Properties"), and its subsidiaries related to the ownership, leasing and management of its neighborhood and community shopping centers and a medical office building ("Pan Pacific Development Properties"). As of December 31, 1999, the Company owned a portfolio comprised of 58 properties located primarily in the Western region of the United States. Commencing with its taxable year ended December 31, 1997, the Company believes it qualifies as a real estate investment trust ("REIT") under Sections 856 through 860 of the Internal Revenue Code. About Specimens Specimen Certificates are actual certificates that have never been issued. They were usually kept by the printers in their permanent archives as their only example of a particular certificate. Sometimes you will see a hand stamp on the certificate that says "Do not remove from file". Specimens were also used to show prospective clients different types of certificate designs that were available. Specimen certificates are usually much scarcer than issued certificates. In fact, many times they are the only way to get a certificate for a particular company because the issued certificates were redeemed and destroyed. In a few instances, Specimen certificates were made for a company but were never used because a different design was chosen by the company. These certificates are normally stamped "Specimen" or they have small holes spelling the word specimen. Most of the time they don't have a serial number, or they have a serial number of 00000. This is an exciting sector of the hobby that has grown in popularity and realized nice appreciation in value over the past several years.