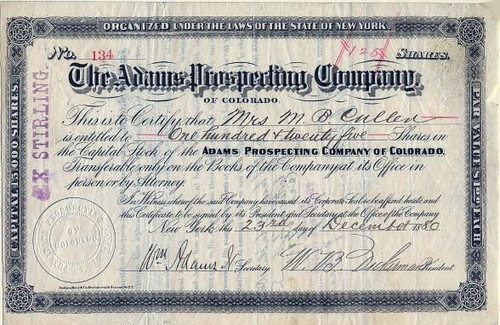 Beautiful certificate from the Adams Prospecting Company of Colorado issued in 1880. The company was incorporated in New York. This historic document was printed by Corlies, Macy & Co. Stationers Company and has an ornate border around it. This item has the signatures of the Company's President, W. B. Dickerman and Secretary. William Adams and is over 137 years old. Minor cut on right margin, not affecting border. Dominick & Dominick was founded on June 15, 1870, as Dominick & Dickerman by William Gayer Dominick and Watson Bradley Dickerman. Born in Chicago, Dominick moved to New York as a child. In 1869 at the age of 25 he purchased a membership in the New York Stock Exchange. Here he met Connecticut-born Dickerman, who was one year younger, and they decided to go into business together, forming their own stock brokerage firm. Two of Dominick's brothers, George and Bayard Dominick, also became Exchange members and partners in the firm. Dominick & Dickerman prospered and in 1889 opened it first branch office, located in Cincinnati, where the firm was only one of two Exchange members. A year later Dickerman left the firm when he was elected president of the New York Stock Exchange. He had failed in an earlier bid in 1883, despite being the head of a ticket put forward by the regular Nominating Committee, losing out to an independent ticket. He would serve as president from 1890 to 1892, then return to the firm. Dominick & Dickerman changed its name in 1899 to Dominick & Dominick, and several new partners were added, including Milnor B. Dominick, Andrew V. Stout, J. A. Barnard, and Bernon S. Prentice. By this time George Dominick had left the firm but other family members would also join Dominick & Dominick, including Darius Dominick and Bayard Dominick, Jr. Dickerman would retire in 1909 and devote the rest of his life to his great passion, the breeding of trotter racehorses. In 1884 he had purchased land in New Rochelle, New York, to establish Hillanddale Farm, which would grow into a 500-acre estate and one of the America's most respected and prolific stables. He passed away at the age of 77 in 1923. DICKERMAN, Watson Bradley, of Mamaro- neck, New York, was born in Mount Carmel, Connecticut, January 4, 1846, son of Ezra and Sarah (Jones) D1ckerman. His father was of Mount Carmel and his mother of Wallingford, Connecticut. The subject of our sketch is a lineal descendant in the fourth generation of Isaac Dickerman of New Haven, and the ancestors from whom each line is descended were settled in New England prior to 166o. Mr. Dickerman attended the Williston Seminary, Easthampton, Massachusetts, during the three years, 1861, 1862 and 1863. He received his training for active business life in the banking house of J. Bunn of Springfield, Illinois, where he was a clerk from 1864 to November 1866. Following his retirement from this position he came to the East and settled in New York city, was elected a member of the New York Stock Exchange in November 1868, and two years later formed a stock brokerage firm, with W. G. Dominick, under the style of Dominick & Dickerman. This partnership still continues and the business has its office at 74 Broadway. Mr. Dickerman was a Governor of the Stock Exchange from 1875 to 1%%2 , was elected its President and served in that capacity twice, in 189o and 1891. Was again made Governor in 1892 and retains that distinction at the present writing. He is also a Director of the Long Island Loan and Trust Company and is President of the Norfolk & Southern Railroad Company. Mr. Dickerman is associated with some of the most popular social organizations in the city. He is a member of the Metropolitan and the Union League clubs, the Century Association (all of New York), the Brooklyn Club, the Country Club (Westchester, New York) and the New York Yacht Club. History from Wikipedia and OldCompany.com (old stock certificate research service).