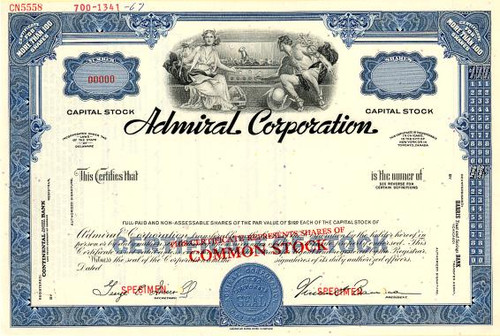 Beautifully engraved specimen certificate from Admiral Corporation printed in 1967. This historic document was printed by American Bank Note Company and has an ornate border around it with a vignette of an allegorical man and woman with a band and radio in the background. This item has the printed signatures of the Company's President and Secretary and is over 46 years old. 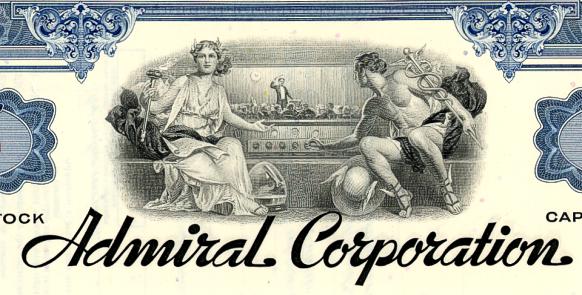 Certificate Vignette
The Admiral Corporation was founded in 1934 by Ross David Siragusa as the Continental Radio and Television Corporation. Siragusa had sold his automobile and most of his home furnishings and invested $3,400 in this new company for the purpose of manufacturing radios. The company was a quick success. Within two years, the company's sales exceeded $2 million, and by 1939 revenues topped $9 million. In December 1940 the company was incorporated in Delaware as the Admiral Corporation. During World War II, growth continued with the arrival of contracts for military electronics. After the war, Admiral steered into another field with vast potential--television. In 1949 Admiral produced 400,000 television sets. It made more than one million television sets in 1950 and in the following year it manufactured five million. Along with companies such as Dumont and Philco it became one of the leading makers of televisions. During the 1950s the range of products Admiral produced grew beyond radios and television sets to include phonographs, record changers, electric refrigerators and freezers, room air conditioners, electric ranges, and other consumer products. The company expanded by acquiring distributing companies such as Golden State Appliances in 1952, and by 1954 Admiral had ten manufacturing plants in the United States and others in Canada, Australia, Italy, and Mexico. The 1940s and early 1950s were among the best years for Admiral. The growth of the company mirrored the prosperity of post-World War II America. Sales grew from $67 million in 1948 to $251 million in 1953. As a stock, it was one of the "high flyers" of the period. At the time, growth appeared unlimited. However, in the mid-1950s labor and material costs began to rise steadily and increased competition from Japanese imports in the 1960s and 1970s created problems for Admiral. The company discontinued its dividend for nine years starting in 1956. Profits were $10 million in 1956 and by 1966 the company had losses of almost $4 million. During the 1960s and 1970s Admiral continued in its efforts to reduce overhead costs and increase plant efficiencies but with little long-term success. Admiral's sales grew from $347 million in 1967 to more than $600 million in 1973. However, profits were falling sharply. In 1971 Admiral sold its color picture tube manufacturing operations to RCA, and in 1973 the company agreed to be acquired by Rockwell International for $78 million. Rockwell later sold Admiral's domestic appliance business to Magic Chef, Inc. About Specimens Specimen Certificates are actual certificates that have never been issued. They were usually kept by the printers in their permanent archives as their only example of a particular certificate. Sometimes you will see a hand stamp on the certificate that says "Do not remove from file". Specimens were also used to show prospective clients different types of certificate designs that were available. Specimen certificates are usually much scarcer than issued certificates. In fact, many times they are the only way to get a certificate for a particular company because the issued certificates were redeemed and destroyed. In a few instances, Specimen certificates we made for a company but were never used because a different design was chosen by the company. These certificates are normally stamped "Specimen" or they have small holes spelling the word specimen. Most of the time they don't have a serial number, or they have a serial number of 00000. This is an exciting sector of the hobby that grown in popularity over the past several years.