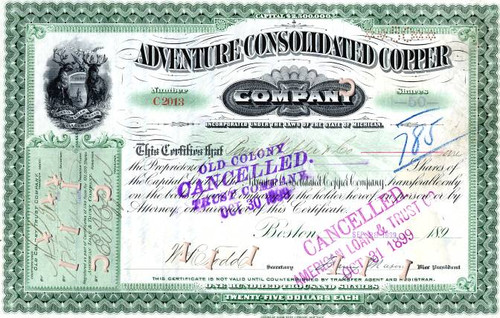 Beautifully engraved certificate from the Adventure Consolidated Copper Company issued in 1899. This historic document was printed by the American Banknote Company and has an ornate border around it with a vignette of two deer and the Company's name. This item has the handwritten signatures of the Company's Vice President, and Secretary, and is over 116 years old. Issued to Paine Webber & Co.

Certificate Vignette
The Adventure Consolidated Copper Company, organized in 1898, mined the Butler, Evergreen, Knowlton, and Ogima lodes. The company operated until 1917, producing 10,783,889 pounds of copper. The most extensive workings were on the Knowlton lode, where most of the datolite nodules are believed to have been found.