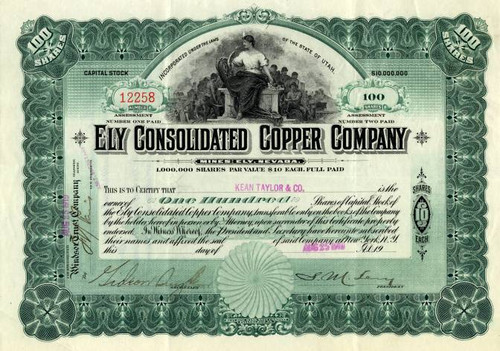 Beautiful certificate from the Ely Consolidated Copper Company issued in 1919. This historic document was printed by the Republic Bank Note Company and has an ornate border around it with a vignette of an allegorical. Incorporated in Utah. This item has the original signatures of the Company's President, S. M. Levy and Secretary,Gideon Snyder and is over 94 years old. 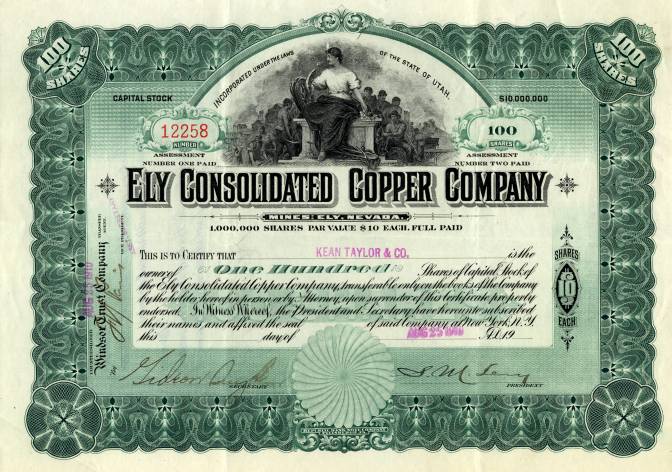 Certificate
Copper Curb and Mining Outlook: The Truth Regarding Mining 1916 TO RESUME WORK AT ELY CONSOLIDATED NEW INTERESTS TAKE CHARGE OF COMPANY'S AFFAIRS Will Obviate Necessity of Assessment-- Orebodies Exposed In Zack and Brilliant Shafts to Be Opened--Flotation Plant to Be Installed. Gideon Snyder, secretary of the Ely Consolidated, in a circular to shareholders under recent date, states that plans have been perfected whereby strong financial interests in Salt Lake and New York City have become interested in the Ely Consolidated company, which should result in the immediate resumption of operations at the company's mines in Ely, Nevada, and obviate the necessity of an assessment on stockholders. The plan of the company is to open the known ore bodies in the Brilliant and Zack shafts and to take advantage of the existing high price of metals by shipments of direct smelting ores and to install as quickly as advisable an oil flotation plant to work the bodies of the lower-grade copper ores opened on the 500 and 600 levels of the Zack shaft and between the 400 and 600 levels of the Brilliant shaft. Mr. Snyder states that the present ore bodies will be made available for immediate operation and the property put upon a substantial and profitable basis. Ely Consolidated owns 400 acres of patented ground, adjoining Nevada Consolidated, and has three shafts and more than 4000 feet of development work accomplished. C. W. Geddes will be in charge of work at the property. Mr. Geddes was formerly superintendent of the Goldfield Consolidated and is now consulting engineer for the First National Copper Co. The Ely district recorded production from one copper property which was the Ely Consolidated Copper Company. History from OldCompany.com, Mineral resources of the United States and SavingsBonds.pro (collectible Savings Bonds website)