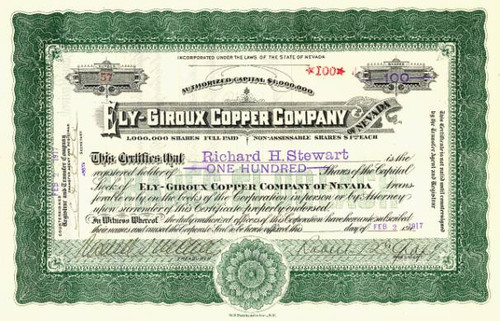 Beautifully engraved certificate from the Ely - Giroux Copper Company dated 1917. This historic document was printed by the W. N Perrin & Co. Inc, N.Y. Company and has an ornate border around it with the company's name in fancy print on top center. This item has been had signed by the Company's President (Robert LaGraff) and Secretary (Roswell S. Nichols) and is over 88 years old. This company was incorporated under the laws of the State of Nevada on November 30, 1909. Its head office was located at Ely, Nevada, and its executive office was at New York City, New York. The Ely-Giroux Copper Company of Nevada held copper claims in White Pine County, Nevada.