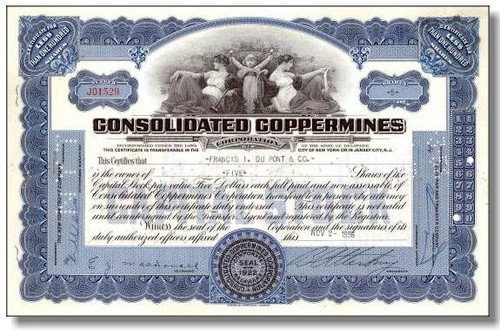 Beautifully engraved certificate from the Consolidated Coppermines Corporation issued in the 1950's. This historic document was printed by the American Banknote Company and has an ornate border around it with a vignette of allegorical women and a child. This item has the printed signatures of the Company's President and Secretary and is over 55 years old.

Certificate Vignette
The Robinson District, White Pine County Although the Ely District was organized in 1868, it produced little until the smelter in nearby McGill was completed in 1907. Copper was discovered here in the early 1870s, but without sufficient demand, the lack of transportation, the low grade of the ore, and the difficulty in extracting the copper made it unprofitable to mine it. Copper was re-discovered in 1900, at the same time as the silver boom in Tonopah was beginning. Mark Requa optioned the copper claims of Edwin Gray and Dave Bartley. Requa was the son of a Comstock engineer. His initial interest in the area was to build a feeder railroad to the Eureka and Palisade Railroad. However, the copper soon interested him. He organized the White Pine Copper Company in 1902, and soon solved problems related to metal extraction and transportation. When he went east to secure financing for the new mine and smelter, he learned that the company that owned land next to his, the New York and Nevada Copper Company, was bankrupt. He purchased it and created the Nevada Consolidated Copper Company. The Guggenheim family already controlled the Utah Copper Corporation at Bingham Canyon. With their financing, the mine and smelter near Ely were built, along with needed railroad lines. Requa ultimately lost control of the company to the Guggenheims. The first blister copper was shipped in 1908. The mine earned only $622,470 in the first year, but brought in $6,561,787 of copper in 1909. Besides Ely, four company towns were created to house the miners and smelter workers. Ruth was built near the mine, and McGill was built near the smelter. The two other company towns were Kimberly and Veteran. Ruth, Kimberly, and Veteran became copper open pits. Ruth was moved and survives in its new location. The pits were named after the towns that they displaced. Consolidated Coppermines Company, and later, Kennecott Copper Corporation, owned the Robinson District copper mine. The ore was carried by rail 22 miles to the McGill Smelter. The copper mine of the Ely area continued until declining copper prices forced its closure in 1978. In that time, more than 4.5 billion pounds of copper were taken from the Robinson District. Gold is a by-product in this mine. In its first 60 years, 2.7 million ounces of gold also were produced. In 1986, gold mining resumed in the Robinson District. As hundreds of thousands of ounces of gold and silver were extracted, Magma Copper Company bought the claims that had belonged to Kennecott and the gold mines. BHP purchased Magma Copper Company as it prepared to begin mining copper again. The new mine will send 46,000 tons per day of ore to the mill. The ore will be ground, subjected to flotation, and filtered until it consists of a concentrate of 28% copper. The concentrate is carried by truck to a smelter in Arizona. The project will produce 142,000,000 pounds of electrolytic copper each year, along with 92,000 ounces of gold and 343,000 ounces of silver. The mine is expected to be open for 17 years. When it is finished, it will be reclaimed. It will be reshaped by earth moving equipment. Then vegetation native to the Great Basin will be planted. A unique strategy uses cattle to help to recondition the land and soil.