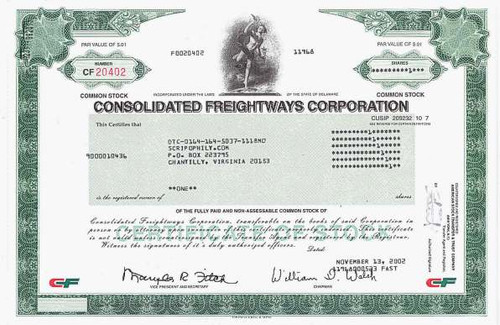 Beautifully engraved certificate from the Consolidated Freightways Corporation. This historic document was printed by the Thomas Greg and Sons and has an ornate border around it with a vignette of the company logo between an allegorical man and woman. This item has the printed signatures of the Company's Chairman ( William D. Walsh ) of the Board and its Secretary. 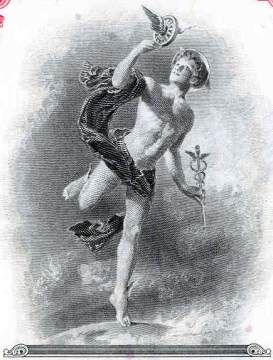 Certificate Vignette
Consolidated Freightways Corporation (CFC) is a $2.3 billion, 20,000 person organization that provides transportation and logistics services on six continents. The corporation (Nasdaq: CFWY) is made up of six operating companies. On September 3, 2002, Consolidated Freightways Corp. filed for Chapter 11 bankruptcy protection with the United States Bankruptcy Court for the Central District of California. Consolidated Freightways operates one of the world's largest less-than-truckload (LTL) transportation networks. The company's highly skilled 20,000 professionals specialize in long haul freight transportation throughout North America. CF's vast network of 350 terminals and more than 30,000 over-the-road vehicles, serves virtually every market in the U.S., Canada and Mexico. Shipments typically move between 500 and 3,000 miles and weigh between 300 and 15,000 pounds. CF's core markets are concentrated in North America and include integrated trucking capabilities to and within Canada, Mexico, Alaska, Hawaii, Puerto Rico and the Caribbean. In Canada, CF offers intra-Canadian and inter-Canadian long-haul trucking services with seamless border crossings into both the U.S. and Mexico. In Mexico, Transportes CF Alfri-Loder, commonly known as "CF Mexico" is Mexico's largest and most extensive LTL network. CF Mexico serves both intra-Mexico and inter-Mexico clients without hand-offs or transfers at the U.S.-Mexico border. VANCOUVER, Wash., September 12, 2002 - Consolidated Freightways Corporation said today that it has been advised by the Nasdaq Listing Qualifications Department that, based on its balance sheet reported in the Form 10-Q for the period ended June 30, 2002, the company fails to comply with the net tangible assets and stockholders equity requirements for continued listing on The Nasdaq Stock Market. The listings department indicated that this issue, as well as the company's recent bankruptcy filing, would be considered at the company's delisting hearing on September 20, 2002. The hearing was initially scheduled in connection with the company's failure to timely file its Form 10-Q for the period ended June 30, 2002, which has since been filed. The company anticipates that after Nasdaq concludes its review, it will determine that the company has not adequately addressed these issues and the company's securities will be delisted. The company said it does not anticipate creditor claims to be fully satisfied under its Chapter 11 proceedings, and that the company's stockholders will likely receive no value for their common stock. On September 4, 2002, the company's trading symbol was amended to "CFWEQ" to denote both the company's filing delinquency and the bankruptcy filing. Consolidated Freightways, which is headquartered in Vancouver, Wash., filed for bankruptcy protection September 3, 2002 and plans to liquidate the business in an orderly manner. Its CF AirFreight, Canadian Freightways Ltd. and Grupo Consolidated Freightways, S.A. de RL subsidiaries continue to operate as usual. Additional information about the company's Chapter 11 filings can be obtained online at www.cacb.uscourts.gov or at the company website www.cfwy.com.