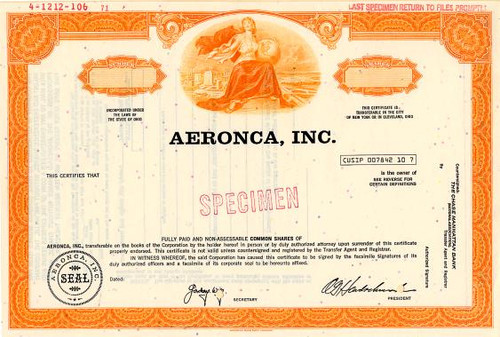 Beautiful engraved specimen certificate from the Aeronca, Inc dated in 1971. This historic document was printed by America Bank Note Company and has an ornate border around it with a vignette of an allegorical woman. This item has the printed signatures of the Company's President and Secretary and is over 45 years old. 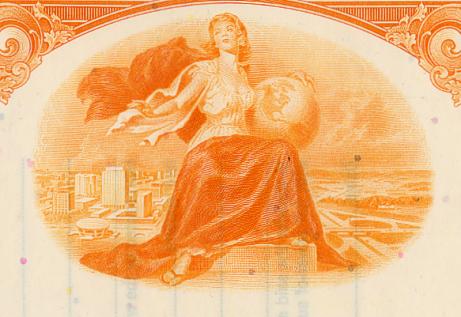 Certificate Vignette
The Aeronca Aircraft Corporation was founded November 11, 1928 in Cincinnati, Ohio. The company was the first to sell a profitable general aviation aircraft, and by the time production ended in 1951, Aeronca had sold 17,408 aircraft in 55 models. Production began with the Jean A. Roche-designed Aeronca C-2 monoplane, often called the Flying Bathtub, in 1929. The next major model was the Scout of 1937, a two-seater, which was developed into the famous Chief and Super Chief the next year. The Defender, a tandem trainer version of the Chief with a higher rear seat, was used in training many of the pilots who flew in World War II. Several observation and liaison aircraft designs were also produced during and after the war, including the L-3, L-16, and O-58. Following the close of World War II, civilian production of the Chief and Defender resumed. 1945 also saw the introduction of a new model based on the Super Chief: the 7AC Champion or Champ. The Champ was a tandem development that shared many components with the Chief, and outsold its sibling at a rate of 8 to 1. Between 1945 and 1951, over 10,000 Champions were sold. Aeronca ended production in 1951, selling the Champion and Chief designs to the new Champion Aircraft Corporation, which continued the Champion as the Citabria. Aeronca now builds components for aerospace companies including Boeing, Northrup, Lockheed, and Airbus. History from Wikipedia and OldCompany.com (old stock certificate research service) About Specimens Specimen Certificates are actual certificates that have never been issued. They were usually kept by the printers in their permanent archives as their only example of a particular certificate. Sometimes you will see a hand stamp on the certificate that says "Do not remove from file". Specimens were also used to show prospective clients different types of certificate designs that were available. Specimen certificates are usually much scarcer than issued certificates. In fact, many times they are the only way to get a certificate for a particular company because the issued certificates were redeemed and destroyed. In a few instances, Specimen certificates we made for a company but were never used because a different design was chosen by the company. These certificates are normally stamped "Specimen" or they have small holes spelling the word specimen. Most of the time they don't have a serial number, or they have a serial number of 00000. This is an exciting sector of the hobby that grown in popularity over the past several years