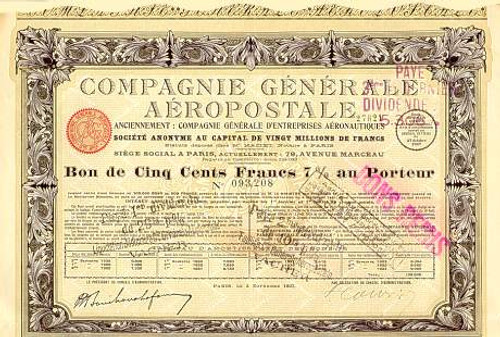 Beautifully engraved Certificate from the Compagnie Generale Aeropostale issued priot to 1930. The company was a pioneering Air-Mail company of the 1920's and 1930's. Compagnie GÃ©nÃ©rale Aeropostale was the first company to ever fly mail between South American cities and France. Compagnie GÃ©nÃ©rale Aeropostale, the first to ever fly mail between South American cities and France. In 1927, Lignes AÃ©riennes LatÃ©coÃ¨re was bought out by the South-American- based French businessman Henri Bouilloux-Lafont, and the whole enterprise renamed Compagnie GÃ©nÃ©rale AÃ©ropostale. Jean Mermoz (Jean Mermoz is the most famous aviator in France. He is as well-known in France as Charles Lindbergh or Amelia Earhart are in the United States. In the 20's and 30's, when he was making his reputation, the American press often referred to him as "the French Lindbergh.") , who had just turned twenty-six, was sent out to take charge of the South American lines. By this time it was clear that Jean Mermoz shared the kind of dedication to getting the mail through that AÃ©ropostale sought. He sought always to make the routes shorter and quicker. Mermoz himself was an incredibly lucky and skilled pilot, capable (so others said) of extraordinary feats. Yet Mermoz was determined to make the extraordinary ordinary, and prove that the routes could be flown by any good pilot in a good plane. One of his first steps was to inaugurate night flights. At that time, instrument flying was unreliable, radio beacons were non-existent and pilots navigated at least in part by landmarks. Flying was faster, but it could only be done in the daytime, and sometimes the weather prevented flying in the daytime. How could they beat ground transportation if the ground transports could travel at night and they couldn't? If they could fly at night, they could make up the time lost by bad weather during the day. However, night flights had only been tried on short distances in fairly populated areas. People thought Mermoz was crazy to try it in South America, where the distances were long and the ground support was sparse. Nevertheless, he made his first night flight in April of 1928, flying from Natal to Buenos Aires and landing by the light of three fires. Within a year night flights were a regular thing. This historic document has an ornate border around it with a underprint of the company name and logo. This item is hand signed and is over 74 years old. There are at least 7 unused coupons attached to the bottom of the document.