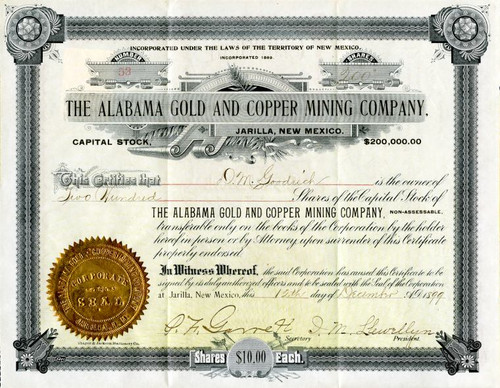 Beautiful certificate from the Alabama Gold and Copper Mining Company of Jarilla, New Mexico issued in 1899. This historic document has an ornate border around it with the company's name on top center and has an embossed corporate seal. This item has the signatures of the Company's President, J. M. Llewellyn and Secretary, Pat Garrett.

Sherriff, Pat Garrett's Signature Patrick Floyd "Pat" Garrett (June 5, 1850 February 29, 1908) was an American Old West lawman, bartender, and customs agent who became famous for killing Billy the Kid. He was also the sheriff of Lincoln County, New Mexico as well as DoÃ±a Ana County, New Mexico. Patrick Floyd Garrett was born in Alabama in 1850. Although too young for service in the Civil War, in 1869 he followed many veterans west. After trying his hand as a cowboy in Texas, he found work as a buffalo hunter. Reportedly, he was so good at his job, the skinners could not keep up with him. A dispute with another hunter indicated to Garrett that he could kill humans as well as buffalo (the killing of Joe Briscoe appeared to be self-defense). He was never charged in the death, but his hunting days were over. Garrett wandered into New Mexico, becoming a gambler in the Fort Sumner area, where he reportedly met Henry McCarty, aka William Bonney, aka Billy the Kid. After failed attempts to establish his own restaurant/saloon, Garrett decided to become a lawman. He ran for and was elected Sheriff of Lincoln County in 1880. His first assignment was to stop Billy the Kid. Garrett and his posse arrested "the Kid" at Stinking Springs, New Mexico. "The Kid" was tried and convicted, but while awaiting hanging, he escaped. Garrett decided that would not happen again; knowing the Kid (and exactly how well he knew him is still controversial), he quickly located him, hid in the dark and gunned him down at the first opportunity. After putting an end to "The Kid's" reign of terror, unfortunately, the remainder of Garrett's life would be anticlimactic. He was reportedly ill-tempered and a drunk, which may have contributed to his failing to win re-election in 1882. He seems to have taken up ranching and worked on the biography of Billy the Kid, which Garrett published in 1883. He also apparently kicked around the area taking small assignments, such as probate research, as this lot suggests. Later in the year he was recruited by Jordan McAllister on behalf of the LS Ranch to organize the Home Rangers in the Texas panhandle, formed to break up the Cowboy Strike. He drifted back and forth between Texas and New Mexico until 1901, when his friend Teddy Roosevelt appointed him customs collector in El Paso, a position he held for 5 years. He reportedly lost that position because of some questionable associations which were an embarrassment to Roosevelt. Garrett accumulated enough debt, mostly taxes, drinking and gambling debt, that he was required to sell his ranch in 1908. He was murdered while showing the ranch to a buyer on "leap day," Feb. 29th. Jesse Wayne Brazel was tried and acquitted in the murder, and many think Garrett really was killed by someone else. The suspects range from a hired hit by the supposed buyer to other gamblers to outlaws with whom Garrett clashed over the years, or maybe just someone who was the victim of his bad temper. History from Wikipedia and OldCompany.com (old stock certificate research service)