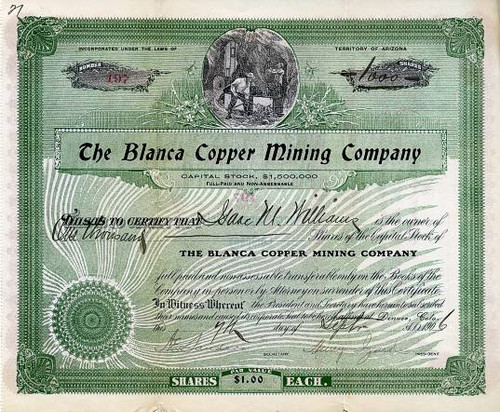 Beautiful certificate from the Blanca Copper Mining Company issued in 1906. This historic document has an ornate border around it with a vignette of a group of miners working underground. This item has the signatures of the Company's President, Henry Izard and Secretary, A. E. Sanders and is over 103 years old. Issued to Isaac Williams for 1000 shares. Very Fine. 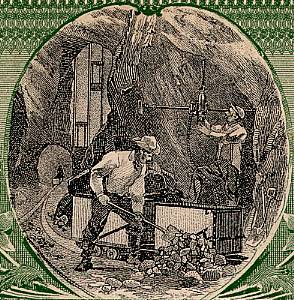 Certificate Vignette
Incorporated in Territory of Arizona. Datelined Denver, Colo. Owned 60 acres in the Bear Mountain district (New Mexico), about 8 miles from Silver City. Claimed to have old workings, and said to be reopening by a tunnel claimed to show auriferous and argentiferous copper ore of good assay value. This is one of the promotions of the Financial Security & Trust Co, of Denver, and probably is absolutely fraudulent, as this same company was the promoter of the Spanish Lost Bullion Mines, Geronimo Copper MC and Pizarro Copper MC, all of which claimed to have old Spanish workings. The Spanish Lost Bullion was proven in court to be an outright swindle, and presumably other promotions of the company are no better. (Copper Handbook, 1908, p.881 and Holabird)