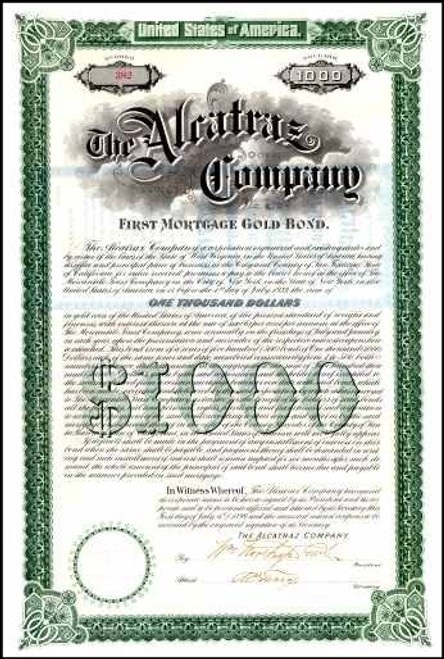 Beautiful certificate from the Alcatraz Company issued in 1899. This historic document was printed by the Union Lithograph Company and has an ornate border around it with a vignette of the company's name witn an underprint of clouds. This item is hand signed by the company's president and secretary and is over 123 years old.

Ahough not related to the Alcatraz Company out in the middle of the San Francisco Bay, the island of Alcatraz is a world unto itself. Isolation, one of the constants of island life for any inhabitant - soldier, guard, prisoner, bird or plant - is a recurrent theme in the unfolding history of Alcatraz. Alcatraz Island is one of Golden Gate National Recreation Area's most popular destinations, offering a close-up look at a historic and infamous federal prison long off-limits to the public. Alcatraz: Federal Prison 1934-1963 Born of necessity, perhaps even political expediency, Alcatraz represents the federal government's response to post-Prohibition, post-Depression America. Both the institution and the men confined within its walls are a part of this era, and in order to be studied with any degree of understanding, it must be attended to with a focus on this time period. Prisons are a reflection of society and the reflection offered by Alcatraz is one of great clarity. The collaborative effort of attorney general Homer Cummings and Director of the Bureau of Prisons, Sanford Bates, produced a legendary prison that seemed both necessary and appropriate to the times. The emergence of persistent assertions about J. Edgar Hoover's interest and influence with regard to Alcatraz cannot be corroborated, but neither have they been completely denied. With the public peace constantly threatened by crime, a response had to be made and Alcatraz was that response. An in-house memo issued by Cummings shortly after taking office addressed the subject of creating a special prison for kidnapers, racketeers, and individuals guilty of predatory crimes. A remote site was sought, one that would prohibit constant communication with the outside world by those confined within its walls. Although land in Alaska was being considered, the availability of Alcatraz Island conveniently coincided with the government's perceived need for a super-prison. Having taken possession of the former Army prison and having circumvented the San Francisco citizens who were concerned at the prospect of vicious criminals in the near vicinity, the Bureau of Prisons set about selecting a warden who could do the job. A well-organized, no-nonsense businessman and prison administrator with twelve years of experience in the California Department of Corrections, James A. Johnston was to be that man. Johnston had retired at the time of his appointment by the Department of Justice, and its acceptance resulted in his serving as warden of Alcatraz for the next fourteen years. Classified as a concentration model, where difficult-to-manage prisoners from other institutions would be concentrated under one roof, Alcatraz served as an experiment. Segregation on this scale had not before been practiced, and only time would indicate its success or failure. Warden Johnston and the second Director of the Bureau of Prisons, James V. Bennett, both were men well ahead of their time. Visionaries in the field of penology, their knowledge enabled Alcatraz to function as it had been hoped and to serve later as a model for the federal prison located in Marion, Illinois.