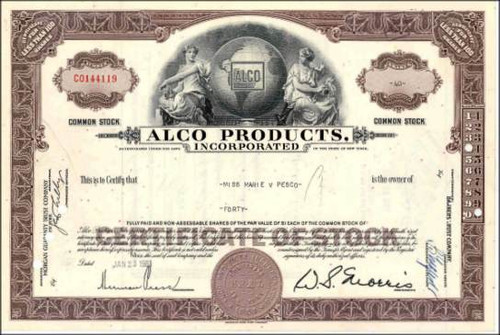 Beautifully engraved certificate from the Alco Products Incorporated issued in 1961-1965. This historic document was printed by the American Banknote Company and has an ornate border around it with a vignette of two allegorical women by a globe. This item has the printed signatures of the Company's President and Treasurer and is over 37 years old. 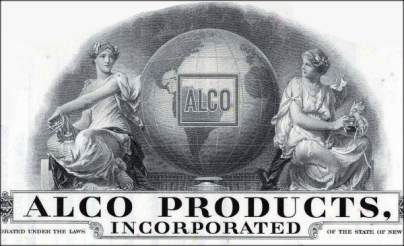 Certificate Vignette
ALCO's world headquarters is in St. Louis, Missouri. Back in the days when ammonia and carbon dioxide were almost the only refrigerants used--long before air conditioning had become an important part of the refrigeration industry--the Alco Valve Company was pioneering the control of refrigerant flow. The only ALCO product at that time was an automatic constant pressure expansion valve for ammonia. This first valve was a great step forward in refrigerant flow--it eliminated the need for constant personal attention on refrigerating systems. ALCO's first factory, if it could be called one, was in a basement room. However, ALCO's first product met with such immediate acceptance that in less than a year a larger facility was needed. During ALCO's first year, only 500 units were produced. Today, nearly 2,000 units are produced in less than an hour. Hundreds of customers representing highly diversified companies throughout the world are using ALCO products. Fewer than 20 persons were employed in 1930; today ALCO employs over 1,000 people, including experienced field engineers and direct sales representatives located strategically in the U.S., Canada, Europe and Japan. Those portions of the world not covered directly are serviced by the International Sales Department in St. Louis. ALCO's main emphasis has been on technical advances and new products in the field from which it took its name: "Automatic Liquid COntrols" for the refrigeration and air conditioning industries. World War II spurred production of these controls and also the development of ALCO products for other fields. Soon, aircraft hydraulic controls and actuating devices, radio direction finders, and aircraft windshield wipers (now carried by Rosemount Division--Emerson Electric Co.) were in production. Throughout the war, ALCO was a proprietary supplier of refrigerant flow controls to the U.S. Navy and Maritime Commission for surface and subsurface vessels. After the war, demand for ALCO's diversified products grew rapidly. Research for new products went steadily forward, and a new concept in refrigeration control was realized with a mechanical pressure-limiting expansion valve. From drawing boards and laboratories came 4-way reversing valves, refrigerant distributors, and many other new refrigerant controls. ALCO is now aggressively developing control devices for new industrial and electronic markets. Emerson Electric Co. acquired ALCO in 1967. ALCO began broadening operations in the U.S. Filter-driers for refrigeration systems are now produced in Hazlehurst, Georgia. A modern manufacturing facility at Wytheville, Virginia, produces electrical solenoid valves and 4-way reversing valves for heat pump systems. International scope has been achieved with plants manufacturing refrigeration valves in Germany, Japan, Canada, and with licensees in the People's Republic of China, and most recently, Russia. This expansion, together with increasing emphasis on new products at its principal plant in St. Louis, demonstrates ALCO's confidence in its own future and in the growth of the vital industry it serves.