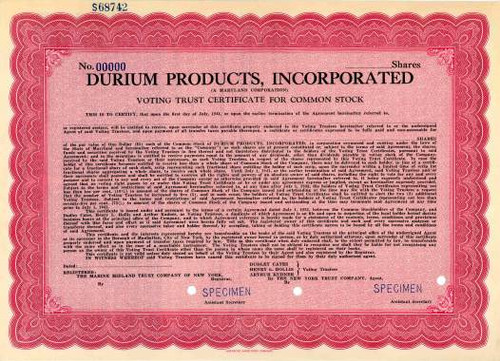 Beautifully engraved specimen certificate from the Durium Products, Incorporated. This historic document was printed by the American Banknote Company in 1932 and has an ornate border around it. This is the first time we have seen this certificate. 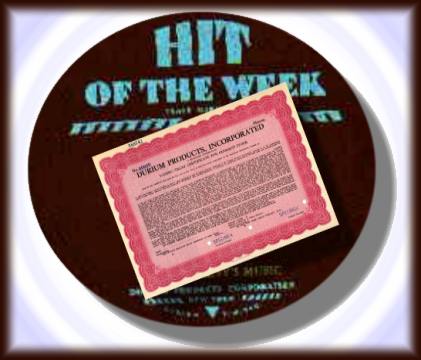 Hit of the Week was the brainchild of Dr. Hall Trueman Beans, a physics professor at Columbia University, who invented a flexible plastic ("Durium") in 1929. The Durium Products Corp. was formed in late 1929 to market single-sided records utilizing Beans' plastic, and the first Hit of the Week discs were announced in February 1930. Studios were in the McGraw-Hill Building on 42nd St., New York. The records, which were sold by news-stands, originally contained a single selection, and a new 15-cent record was released every Thursday. Some were also given away free with subscriptions to magazines like Liberty. Titles were selected by a board that included Eddie Cantor, Florenz Ziegfeld, and Vincent Lopez, and sales were reportedly brisk at first. By early 1931, Durium was in trouble over unpaid royalties, and the company was reorganized in June 1931 as a subsidiary of the Irwin-Wassey Advertising Agency. The format was revamped in August, 1931, using two slections per side; a price increase (to 20 cents) soon followed, and sales fell. The final release (#F-4-5, "My Silent Love" / "Hummin' to Myself") came on June 23, 1932. Durium also produced an array of novelty, private, and promotional issues as well as the Durium Junior 4" disc and the Durium DeLuxe disc. Subsidiaries operated in England, France, and Italy; the latter was still operating as late as 1950, although the American parent was long-gone.