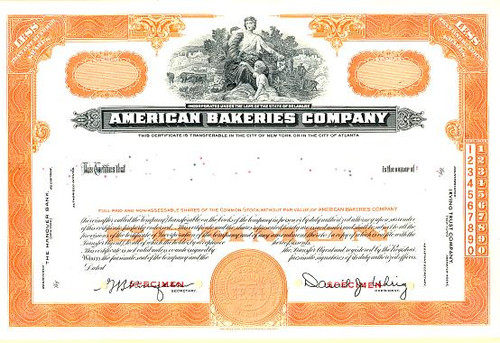 Beautifully engraved specimen from the American Bakeries Company. This historic document was printed by Security Columbian Bank Note Company and has an ornate border around it with a vignette of a woman with a child sitting in front of a farm. This item has the signatures of the Company's President and Secretary.

Certificate Vignette
American Bakeries Company merged into Interstate Bakeries Corp. Interstate Bakeries Corporation is one of the largest wholesale bakers and distributors of fresh delivered bread and snack cakes in the United States. The Company has two major units which are the Wholesale Baking Division and Retail Bakery Outlets. Wholesale is divided into East and West with the Western Wholesale Business Unit headquartered in Phoenix, Arizona and the Eastern Wholesale Business Unit headquartered in Kansas City, Missouri. The Company also sells dry products. The Company operates 46 bakeries throughout the United States and employs approximately 29,000 people. From these strategically dispersed bakeries, the Company's sales force delivers baked goods to more than 200,000 food outlets on approximately 7,500 delivery routes. The Company's products are distributed throughout the United States, primarily through its direct route system and approximately 960 bakery outlets, and to some extent through distributors. The IBC product line is marketed under a number of well-known national and regional brands, which include Wonder, Hostess, Home Pride, Drake's, Beefsteak, Bread du Jour, Dolly Madison, Butternut, Merita, Parisian, Colombo, Sunbeam, Millbrook, Eddy's, Holsum, Sweetheart, Cotton's Holsum, Di Carlo, J.J. Nissen, Marie Callender's and Mrs. Cubbison's. In addition, the Company is a baker and distributor of Roman Meal and Sun-Maid bread. About Specimens Specimen Certificates are actual certificates that have never been issued. They were usually kept by the printers in their permanent archives as their only example of a particular certificate. Sometimes you will see a hand stamp on the certificate that says "Do not remove from file". Specimens were also used to show prospective clients different types of certificate designs that were available. Specimen certificates are usually much scarcer than issued certificates. In fact, many times they are the only way to get a certificate for a particular company because the issued certificates were redeemed and destroyed. In a few instances, Specimen certificates we made for a company but were never used because a different design was chosen by the company. These certificates are normally stamped "Specimen" or they have small holes spelling the word specimen. Most of the time they don't have a serial number, or they have a serial number of 00000. This is an exciting sector of the hobby that grown in popularity and realized nice appreciation in value over the past several years.