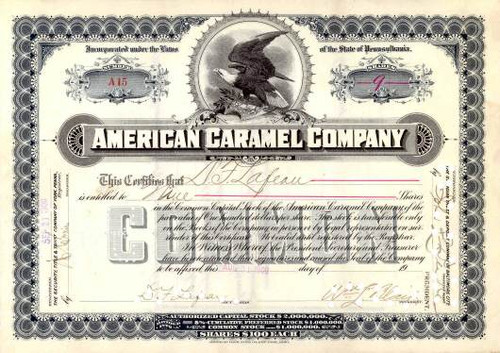 Beautifully engraved SCARCE certificate from the American Caramel Company issued in no later than 1913. This historic document was printed by the American Banknote Company and has an ornate border around it with a vignette of an eagle. This item is hand signed by the Company's President and Secretary and is over 95 years old. 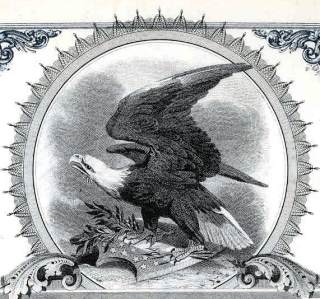 Certificate Vignette
American Caramel was incorporated in 1898 as a consolidation of the Breisch-Hine Company of philadelphia, and the P. C. Wiest Company of York, Pennsylvania. In 1900, Milton Hershey sold his Lancaster Caramel Company in Mount Joy for a million dollars to The American Caramel Company. The company made caramel related candies and was also a major maker of baseball cards that were given along with its candy. The sale of Milton Hershey's Lancaster Caramel Company changed his direction. Refocusing his energies on the Hershey Chocolate Company resulted in Milton Hershey developing a new approach to business. He needed a new factory for his booming business. Instead of building a new factory in an established city, Milton Hershey envisioned building a model town with the money from the Lancaster Caramel Company sale. He chose Derry Township with its rail line, adequate fresh water sources and abundant dairy farms as the location for his chocolate factory. The factory was completed in 1905, and the town of Hershey began to take shape. Daniel Franklin Lafean ( 1861-1922 ) a Representative from Pennsylvania; born in York, York County, Pa., on February 7, 1861; attended the public schools; engaged in candy manufacturing and in banking in York; a director of the Gettysburg College and trustee of the Gettysburg Seminary, Gettysburg, Pa.; elected as a Republican to the Fifty-eighth and to the four succeeding Congresses (March 4, 1903-March 3, 1913); unsuccessful candidate for reelection in 1912 to the Sixty-third Congress; elected to the Sixty-fourth Congress (March 4, 1915-March 3, 1917); was not a candidate for renomination in 1916; appointed commissioner of banking of the State of Pennsylvania in 1917; again engaged in manufacturing pursuits; died in Philadelphia, Pa., April 18, 1922; interment in Prospect Hill Cemetery, York, Pa. The Hon. D. F. Lafean introduced in the House of Representatives, Sixtieth Congress, second session, a bill To construct a Lincoln Memorial Highway as a national tribute of affection toward Abraham Lincoln, late President of the United States."