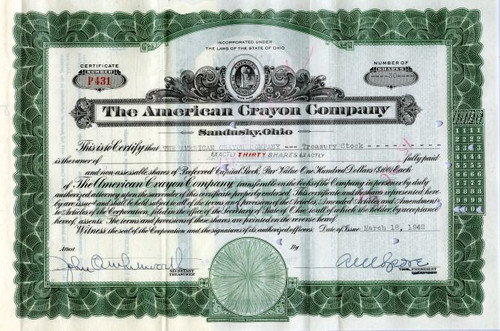 Beautifully engraved SCARCE certificate from The American Crayon Company issued in the 1940's. This historic document was printed by Western Bank Note and Eng Co and has an ornate border around it with a vignette of "Old Faithful". This item is hand signed by the Company's President and Secretary and is over 60 years old. Punch cancelled. 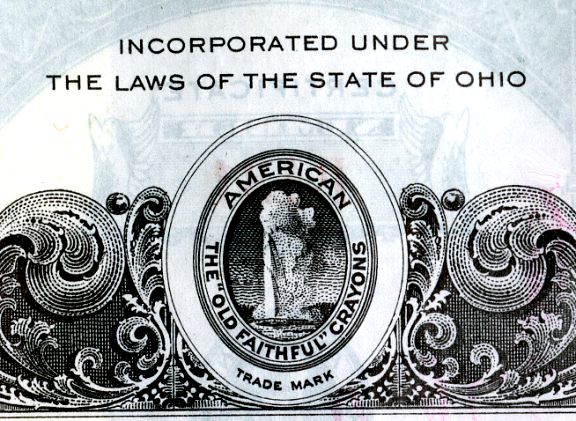 Certificate Image
Known for their chalk crayons, the American Crayon Company in Sandusky, OH spread out to the wax crayon market in 1902. As the popularity of Bowley's crayons spread to schools, his ability to keep up with production forced him to partner with the American Crayon Company who increased his manufacturing output by adopting his crayons and offering a full blown catalog of crayons in 1902. These boxes included The American Crescent Drawing Crayons in 7 and 14 color packages, the American Special School and Drawing Crayons in 7 and 14 colors, the American Electric drawing crayons in 7 and 12 colors, the American Brownie crayons in 7, 12 and 28 colors along with a wooden canister containing 14 colors, the American Perfection crayons in a wooden canister of 7 colors, the American Banner containing six colors and a pencil sharpener. They continued to expand their crayon line to include brands such as Blendwel, Crayograph, Crayarto, Colorit, Crayonart, Crayonex, Emerald, Excello, Giant, Imperial, Kantroll, Kindograph, Kroma, Lakeshore, Old King Cole, Paragon, Pastello, Payons, Perfection, Popeye, Prang, Sketcho, Playmates, Waxena, Wonder and Young Artist brands among others. In 1957 they merged with Joseph Dixon Crucible which eventually merged to form Dixon Ticonderoga Company in 1983; which continues to make and sell crayons to this day. The American Crayon Company,is one of the premier and foremost manufacturers of school art supplies and other industrial products in the nation during its time, originally grew out of the need for a high quality chalk. It soon branched out of a humble kitchen into a national company primarily operated and concentrated in the city of Sandusky. It expanded over time by merging with and absorbing other companies and redirecting its product line focus, and also established itself as a lifetime employer of countless Sanduskians. With the acquisition of Prang's Educational Company around 1915, the American Crayon Company adopted and incorporated Prang Educational Company's mission to make art accessible to the common American household and child by way of the public classroom, thus cementing its historical impact on a local and national scale. World War I interrupted commercial trade between many nations including the United States and Germany. Prang Educational Company's heavy reliance on German chemicals and products to manufacture its own items was impeded by decreased availability before and during World War I. These circumstances pushed Prang Educational Company and American Crayon Company into a merger in 1913. The combined companies organized their own small independent watercolor factory in Sandusky called Kroma Color Company. American Crayon Company's complete take- over of the Prang Educational Company around 1915 gave them the rights to use the unmistakable "Prang" trademark of the "Old Faithful" geyser at Yellowstone National Park as their advertising logo symbolizing quality, value, and tradition. The American Crayon Company manufactured a long line of crayons, chalks, blackboards, erasers, watercolors, pencils, paste, cleaners, and other more industrial items, such as chalk for tailors, carpenters, textile mills, and railroad stockyards. The growing success and popularity of the American Crayon Company led to its prosperous operation at the original Sandusky plant through the 1920s to the 1950s. In January 1957, the American Crayon Company became an affiliate of Joseph Dixon Crucible Company, based in Jersey City, New Jersey. Dixon Ticonderoga Company continues to manufacture Prang products with pride, maintaining the same high standards of excellence established by Louis Prang. History from Encyberpedia and OldCompany.com (old stock certificate research service)