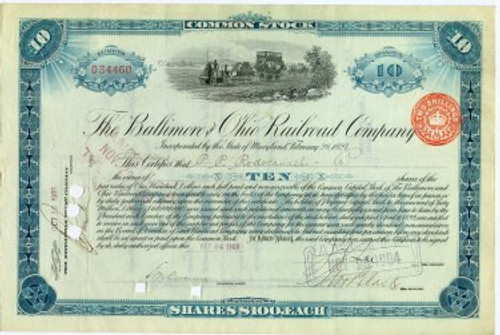 Beautifully engraved Stock Certificate from The Baltimore and Ohio Railroad issued in the period from the 1930 to the 1959. This historic certificate has an ornate border around it with vignette of the Old Tom Thumb Train. The certificate is is over 48 years old.

Certificate Vignette
The Baltimore and Ohio Railroad (B&O) is one of the oldest railroads in the United States, with an original line from the port of Baltimore, Maryland west to the Ohio River at Wheeling, West Virginia and Parkersburg, West Virginia. It is now part of the CSX network, and includes the oldest operational railroad bridge in the world. The B&O also coincidentally included the Leiper Railroad, the first permanent railroad in the U.S. The railroad's former shops in Baltimore, including the Mt. Clare roundhouse, now house the B&O Railroad Museum. History Two men -- Philip E. Thomas and George Brown -- were the pioneers of the railroad. They spent the year 1826 investigating railway enterprises in England, which were at that time being tested in a comprehensive fashion as commercial ventures. Their investigation completed, they held an organizational meeting on February 12, 1827, including about twenty-five citizens, most of whom were Baltimore merchants or bankers. Chapter 123 of the 1826 Session Laws of Maryland, passed February 28, 1827, and the state of Virginia on March 8, 1827, chartered the Baltimore and Ohio Rail Road Company, with the task of building a railroad from the port of Baltimore, Maryland west to a suitable point on the Ohio River. The railroad, formally incorporated April 24, was intended to provide an alternative, faster, route for Midwestern goods to reach the East Coast than the seven-year-old, hugely successful, but slow Erie Canal across upstate New York. Thomas was elected as the first president and Brown the treasurer. The capital of the proposed company was fixed at five million dollars. Early Construction Construction began on July 4, 1828, and the first section, from Baltimore west to Ellicott's Mills (now known as Ellicott City), opened on May 24, 1830. Further extensions opened to Frederick (including the short Frederick Branch) December 1, 1831, Point of Rocks April 2, 1832, Sandy Hook December 1, 1834 (the connection to the Winchester and Potomac Railroad at Harpers Ferry opening in 1837), Martinsburg May 1842, Hancock June 1842, Cumberland November 5, 1842, Piedmont July 21, 1851, Fairmont June 22, 1852 and its terminus at Wheeling, West Virginia (then part of Virginia) on January 1, 1853. The state of Maryland granted the B&O a charter to build a line from Baltimore to Washington, DC in 1831, and the Washington Branch was opened in 1835. This line joined to the original mainline at Relay, Maryland, crossing the Patapsco on the Thomas Viaduct, which remains one of the B&O's signature structures. This line was partially funded by the state, and was operated separately until the 1870s, with the state taking a 25% cut of gross passenger receipts. This line was built in stone, much like the original mainline; by this time, however, strap rail was no longer used for new construction. Most of the stone bridges did not last long, being washed out in floods and replaced at first by Bollman Truss bridges. The Annapolis and Elk Ridge Railroad to Annapolis connected to this line at Annapolis Junction, Maryland in 1840. As an unwritten condition for the charter, it was understood that the state would not charter any competing line between Baltimore and Washington. History from Wikipeida and OldCompanyResearch.com.