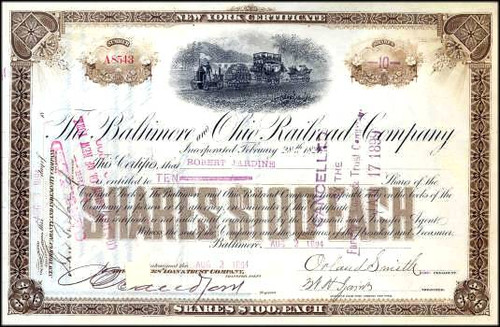 Beautifully engraved certificate from the Baltimore and Ohio Railroad Company issued in 1894. This historic document was printed by the American Banknote Company and has an ornate border around it with a vignette of an old train. This item is hand signed by the Company's Vice President ( Orland Smith ) and Treasurer and is over 118 years old. Diamond punch cancelled through transfer agent's signature, with company's officers' signatures untouched. EF Condition. 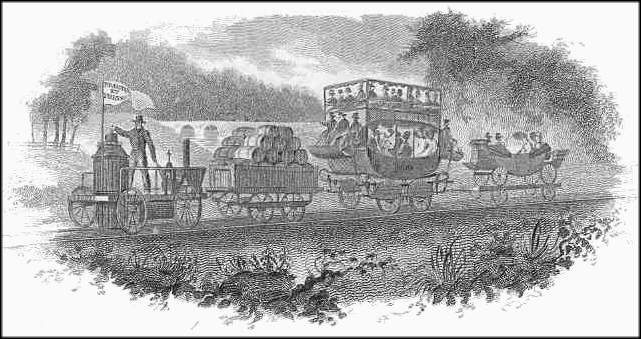 Certificate Vignette
The company was chartered in 1827. It runs east to Philadelphia and New York; West to Chicago and St. Louis and is the oldest US passenger line. Abe Lincoln wrote the Gettysburg address on a line bought by the B&O. It became part of the Chessie system (Chesapeake & Ohio and Baltimore & Ohio), which in 1980 became part of the CSX conglomerate. Orland Smith (May 2, 1825 October 3, 1903) was a railroad executive and a brigade commander in the Union Army during the American Civil War. He led a spirited bayonet charge during the Battle of Wauhatchie that took a significant Confederate position on a hill that now bears his name. Smith was born in New England in Lewiston, Maine. He was educated in the local schools and became a railroad agent, serving as station manager at Lewiston until 1852 when he moved to Ohio. He became an official of the Marietta and Cincinnati Railroad and settled in Chillicothe, Ohio. He was a commander of a militia company in the late 1850s, the "Chillicothe Greys." With the outbreak of the Civil War, Smith joined the Union army and became the Colonel of the 73rd Ohio Volunteer Infantry, raised in Chillicothe, and trained at nearby Camp Logan. Among his volunteer soldiers was Pvt. George Nixon III, the great-grandfather of future President Nixon. The regiment saw action as a part of the Army of Virginia during the Second Battle of Bull Run, after previously serving in western Virginia and fighting at the Battle of McDowell and the Battle of Cross Keys. Smith assumed brigade command in the XI Corps in October 1862, but he did not participate in the Battle of Chancellorsville. He returned to his command shortly before the Gettysburg Campaign. His men held Cemetery Hill on the first day of the Battle of Gettysburg at the orders of Maj. Gen. Oliver O. Howard, and provided an anchor for the retreating Federal soldiers. On the second day, they helped repulse an attack by Brig. Gen. Harry T. Hays' "Louisiana Tigers". Sent to the Western Theater in the autumn of 1863 along with the XI Corps, Smith fought at the Battle of Chickamauga. During the Chattanooga Campaign, Smith led his brigade in the Army of the Cumberland in a successful bayonet assault up a steep hill that now bears his name (Smith's Hill) during the Battle of Wauhatchie. In the army reorganization later that year, his brigade was disbanded and he returned to the command of the 73rd OVI. He was breveted as a brigadier general on March 13, 1865. After the war, he returned to his career as a railroad officer and became President of the Cincinnati, Washington and Baltimore Railroad and later, First Vice President of the Baltimore and Ohio Railroad, with his office in Baltimore, Maryland. Smith died in Chicago, Illinois. He is buried in Green Lawn Cemetery, Columbus, Ohio.