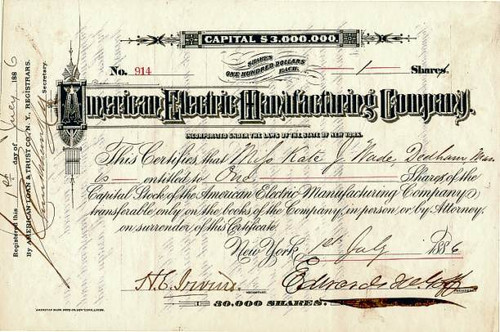 Beautifully engraved certificate from the American Electric Manufacturing Company issued in 1886. This historic document was printed by the American Banknote Company and has an ornate border around it with the company's name on top center. This historic document is hand signed by the Company's President ( Edward Goff ) and Secretary, H. E. Irvine and is over 119 years old. Orginally named "Liberty Enlightening the World." French sculptor, Frederic Auguste Bartholdi intended the Statue of Liberty to serve as a lighthouse with kerosene lamps burning in the crown possibly to imitate the ancient Lighthouse of Alexandria. The United States also expected Liberty would be a Lighthouse to enlighten the entrance to the New World. Edward Goff who was the President of the American Electric Manufacturing donated and installed Ten 8,000-candlepower lamps (a $7,000 contribution) in the crown of the Statue of Liberty. In 1886, one week before the dedication of Liberty as the statue was nearing completion, the Army Corps of Engineers cut two rows of small portholes into the sculpted flame of Liberty's torch for the lighting. There was a steam engine and electric generator in the base of the monument to run lamps inside the modified torch. On the evening of 1 November 1886, engineers flipped the switch. The event was historic, not only as an improvement to the great monument but also because Liberty thus became the first electric lighthouse to operate in the United States. The electric plant on the island that generated the Lights' power was also designed and built by the American Electric Manufacturing Company,. The federal Lighthouse Board administered the Statue of Liberty from November 1886 to November 1901. The jurisdiction of the Lighthouse was then transferred to The War Department. The torch measures 29 feet from the flame tip to the bottom of the handle and is accessible via a 42-foot service ladder inside the arm. The torch ascent was open to the public from 1886 to 1916. The area for the Flame Lamps measures 12 feet high from the base and 7 feet across the base. The Lamps were refitted in 1916, 1931, and 1945.