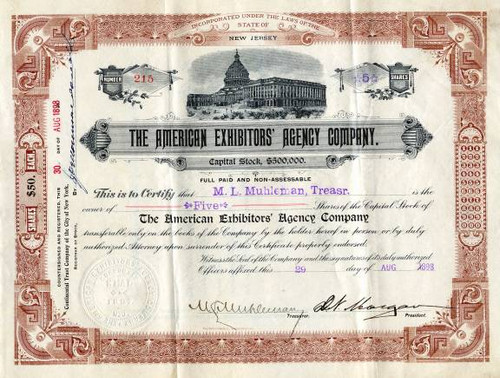 Beautiful certificate from the American Exhibitors' Agency Company issued in 1898. This historic document was printed by the Broun-Green Company and has an ornate border around it with a vignette of the Captiol building. This item has the hand signed signatures of the Company's President, D.N. Morgan, and Tresurer, and is over 119 years old.

Certificate Vignette
THE Electrical World WEEKLY REVIEW OE CURRENT PROGRESS IN ELECTRICITY AND ITS PRACTICAL APPLICATIONS. VOLUME XXXII. FROM JULY 2 TO DECEMBER 31, 1898. THE AMERICAN EXHIBITORS' AGENCY COMPANY for the Paris Exposition of 1900 has been incorporated under the laws of the State of New Jersey with a capital stock of $500,000, and has established general offices in the Commercial Cable Building, 20 and 22 Broad Street, New York, with a branch office in Paris. The purpose of the company's existence is indicated briefly in its title and explained more completely by the following statements of what the company proposes to do: 1st, To take the entire charge of exhibits from the moment they are ready for shipment until they are returned to their owners after the close of the exposition. 2d, To make all the preliminary arrangements, secure appropriate space, pay all charges for freight, insurance, customs, etc., and meet all other necessary expenses upon exhibits. 3d, To put exhibits in place with all necessary appliances, properly display them, care for them, bring their merits duly to the attention of visitors and juries of award, carefully repack and reship them at the close of the exposition, and give them in all respects the same personal care and attention they would receive from the exhibitors themselves. 4th, To act as agents for the sale of the various wares at the exposition, and to take orders for both the purchase and sale of all kinds of goods, wares and merchandise for its patrons. As this company will, in the execution of its functions, combine the representation of a large number of exhibitors, all outlays for salaries and expenses of separate special agents of individual exhibitors will be avoided. By its having always in its employ in Paris a regularly salaried corps of skilled artisans, mechanics and laborers capable of installing, arranging, and caring for all kinds of exhibits in a satisfactory and expeditious manner, the cost of special labor to each exhibitor will, through its medium, be saved, and the scarcity, unskillfulness, or exorbitant demands of labor guarded against; and by means of the combination of shipments and general charters ocean freight rates and other transportation charges will be greatly reduced, as will also insurance premiums and' various incidental expenses. In addition to these considerations of economy, it may be stated that, through the employment of this company, exhibitors will be relieved of many costly and vexatious delays and annoyances resulting from unfamiliarity with the French language had French methods of doing business. Competition for the company's service will be a fixed charge, the amount of which will be duly contracted for with the exhibitor in advance. For The Convenience Of American Exhibitors At The World's Fair In Paris In 1900.-- A company formed for the exclusive purpose of fostering, guarding and developing American exhibits intrusted to their care at the city of Paris before, during and after the exhibition, has taken root in New York under the title of "The American Exhibitors Agency Company." It will act in the capacity of counsel, trustee and executor to the exhibitor; and so thorough and perfect are its plans, equipments and connections that it will be a factor of immense value, both financially and morally, to have this company at the command of an exhibitor, from the time the place is secured, to ship the goods, make their respective merits known to visitors or the committee of awards, box and sell or return them safely to the owner at home, and to transact a variety of other business for its clients. History from OldCompany.com (old stock certificate research service)